Last year the fellows and I attended Tactical Solutions, our local gaming convention. We had some issues with the convention pricing, the games schedule, and some of the people involved.
Long Rant Follows (you can skip it by scrolling straight to the pictures)
The convention had five gaming times: Friday 1800-2200, Saturday 0800-1200, 1300-1700, 1800-2200, and Sunday 0800-1200. But they ended up not having any games on Sunday morning. I put on two games on Saturday (one in the morning and one in the evening), and so I was moving figures and missed out on taking part in the remaining session.
Last year I was running a gaming club at a local school with about a dozen hard-core members. These kids ranged in age from 13-17. Most of them wanted to attend the convention, but the convention organizers insisted on parental supervision the whole time. The organizers eventually bent on that, allowing the kids to attend if each had his own adult supervisor, but by that time all but three kids had decided not to go. The convention organizers wanted to limit the kids to participation in a Warhammer 40K tournament, in which none of my students, historical gamers all, were even remotely interested. The organizers decided in the end that the students could play in the historical games that I ran, which meant that they could really only play in the morning game.
I was pretty turned off by the way the Tactical Solutions leadership handled the whole issue of my students attending. These are very mature kids, no sort of problem, and they got treated like second class citizens. They were effectively limited to one four hour gaming session using my figures and run by me. For those four hours of gaming, each of the three kids paid $20 for a day pass, the full adult price.
All told, our four man group and two of my students collectively paid $180 for a day and a half of gaming. My buddies and I played in a fun colonial game Friday night. Saturday morning I put on an Age of Eagles game that went pretty well. Saturday afternoon we all went home and prepared for the evening game. Saturday evening I put on a Field of Glory tutorial game that was a disaster.
The idea of the FoG game was to learn the rules, which had just released. My buddies, and a couple of other local gamers (Terry and Chuck), got into the easy-going spirit of the thing. Three other players, all of them organizers of the tournament, absolutely ruined the game. They were off having their own conversations while I explained the rules. They argued about what should have been allowed. They got super competitive. One of them repeatedly broke my figures. These guys, the face of Tactical Solutions, were complete asses during the game.
On Sunday, my buddies and I talked it all over. We had played three games. One (the colonial game) was moderately fun. One (the Age of Eagles game) was a great game that we all really enjoyed. One (FoG) was made miserable by the convention organizers. Since I put on the Age of Eagles game with my own figures and terrain, and since our gaming group comprised almost all of the players, why on earth had we paid so much money to play? We could have stayed home for the weekend, hosted our own games with guys we knew we liked to play with, and had a much better time. And all without dropping a couple hundred dollars.
Thus Strategic Problems was born. We decided to play three games over two days. We were hoping to do it at the same time the Tactical Solutions convention was going on, but scheduling conflicts made it necessary to wait an addition week.

The Friday night game was an Age of Eagles scenario set in 1813. Napoleon has maneuvered his army between two larger allied forces and hopes to defeat them in detail before they can combine. 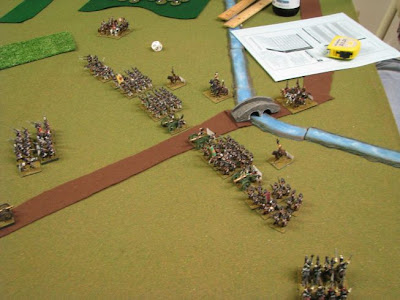 Scott R. commanded the Russians. Don would throw the bulk of the French army against this line. 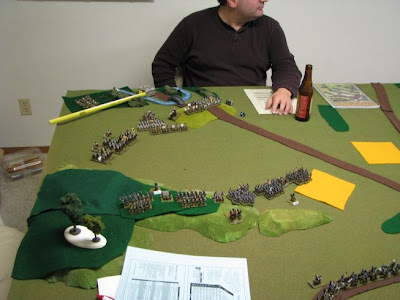 Austin commanded the Austrians. He remained stationary on this ridge for most of the game. The French army consisted of four corps. I commanded this one corps on the French left, tasked with throwing the Austrian advanced guard across the river. I made my assault and was blown to pieces. 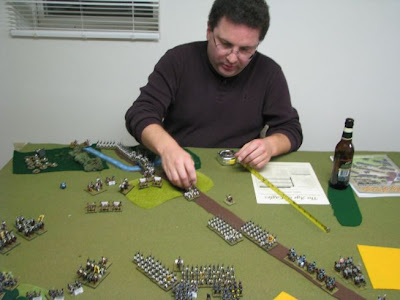 Austin counterattacked, destroying the entire French corps and clearing the way into the French rear. 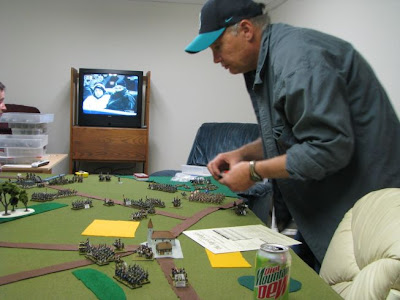 Don threw the other three French corps against the Russians. Hard fighting ensued, as the lines surged back and forth. 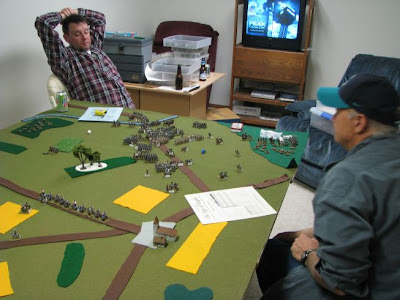 Eventually, Don was able to seize the bridge and keep more Russians from coming on the board. But the Austrians moving on the town in his rear surely indicated at least a tactical victory for the allies. This was a very fun game, as any Age of Eagles game almost invariably is. 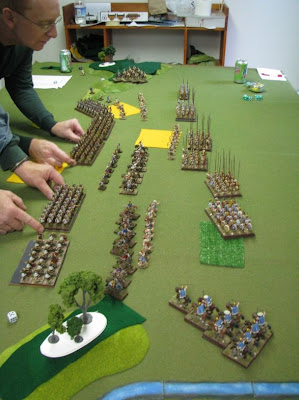 Our second game was a WAB fight, pitting Matt's Greeks against my newly painted Macedonians. Once again, the Macedonian forces proved invincible. If anyone has any tips for how Greeks can counter those cavalry wedges, we would be glad to hear them. 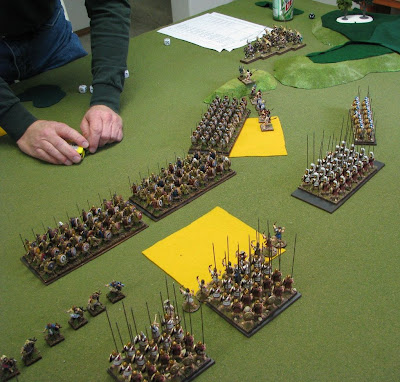 All of our players were present for this game: Austin, Jon and me, my local gaming group; Don and Scott R, our sometime group members who have to make a four hour drive to attend; and Matt, my student from the now defunct gaming club.
Saturday night we played a WWII game at Jon's house. Sadly, we don't have any pictures of the table from that game. The figures were all 15mm Command Decision, and Jon did an excellent job painting them. He really stepped it up on those figures. The game was set in 1940 Norway, which meant a lot of pine trees and snow.
We used War Times Journal's 1943 rules instead of our usual Battlefront WWII. We were mostly underwhelmed with the rules, but good company always makes gaming fun.
I think Strategic Problems 2009 was a great success, and I'm sure we'll begin planning soon for Strategic Problems 2010.
Posted by Scott MacPhee at 9:42 AM