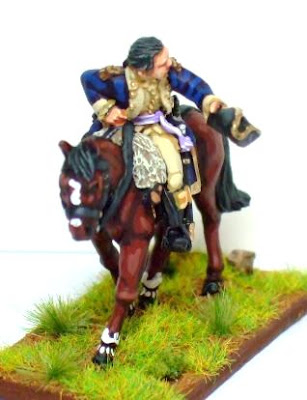 This is Brigadier General Enoch Poor. He wears a blue coat with buff facings and the violet/pink sash of a general officer. 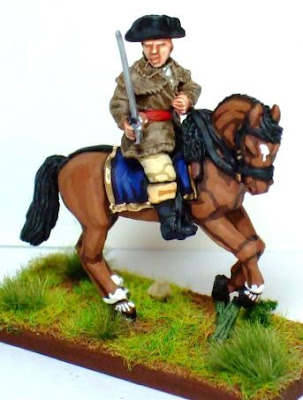 This is Colonel Daniel Morgan, who leads the smallest brigade in my army. Trumbull's famous painting shows Morgan in a white hunting shirt, but I went a few shades darker. 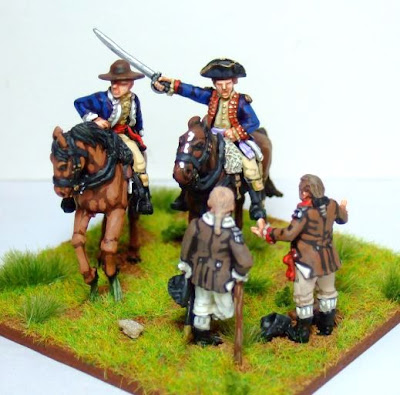 This is my army command stand, with General Benedict Arnold gesturing with his sword, an aide (in the uniform of the Massachusetts regiments) about to gallop off with orders, and officers from the 1st New Hampshire and Dearborn's Light Infantry briefing Arnold on the situation to the front. Arnold's uniform is based on Mollo's plate of the general. The mounted figures are actually from Perry Miniatures' British officers pack, but they painted up well as Arnold and his aide. 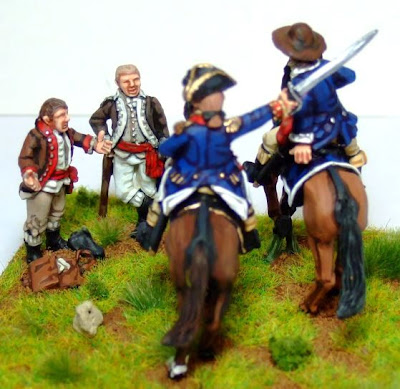 Here's more detail of the two American infantry officers. These are both from pack AW-100 "British officers interrogating a captured Continental officer," which I gather from Tarleton's Quarter contains some interesting personality figures. The man gesturing with his hands bears the likeness of Alan Perry himself, while the officer leaning on a walking stick (which is meant to be a British officer) is Dave Brown, author of General de Brigade.
Posted by Scott MacPhee at 10:28 AM