I've been working on this army in fits and starts since last fall. Regular readers of the blog will have seen some of these figures before, but I want to show the whole army as I'll be displaying it at this weekend's show.
All of the figures are Foundry, except for the Greek hoplites, which are Crusader. I was able to buy most of the figures on eBay, getting them for around $1 each for foot and $3 for horse. I did take advantage of Foundry's Christmas 2008 sale to round out a few units.
The spears, javelins, and pikes are all from North Star. I wanted this army to be able to endure frequent handling, so I used five minute epoxy to affix all the weapons. You'll see a slight bulge at the join on many figures, but these weapons are not coming off, ever.
Many of the shields have transfers from Little Big Men Studios, but many are hand painted as well. For the phalanx rank and file, I went with a very simple shield color scheme of gold drybrushed over brown. This represents the stamped bronze shield facings that Macedonian armies typically issued the men.
I used Litko bases with Wargames Accessories metal bases glued to the bottom. Skrimishers got 1" steel washers. By using steel bases I can use my magnetic sheet movement trays during games. The bases were finished with Noch brown ballast, Woodland Scenics talus and clump foliage, and Silflor prairie tufts.
General: Alexander the Great
This paint scheme is based on the Pompeii mosiac. Alexander got the most ornate paint job of any figure in the army. 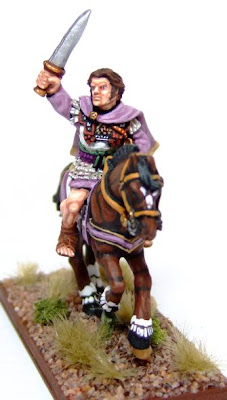 9 Companion Cavalry
I wanted a uniform look for each Macedonian line unit in the army, and I settled on red tunics, white linothorax armor, and bronze helmets. The companions got yellow cloaks with a purple stripe. 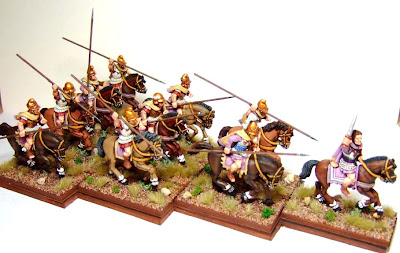 10 Thessalian Cavalry
The Thessalians got blue cloaks with a yellow stripe. The yellow I used is actually a very pale tan color, almost straw. I had experimented with straight yellow, but the primary color was just too jarring against the more naturalistic tones I had used. I found the same thing with the red cloaks. If I used a straight red, they overpowered the rest of the figure and just looked too neat and tidy. By highlighting with a pale brick red, I was able to get a more worn "campaign" look. 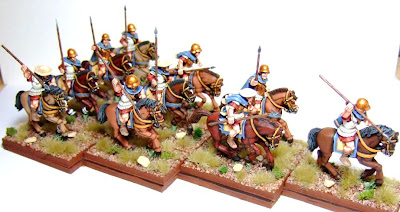 10 Greek Light Cavalry
I abandoned the uniform color scheme for my skirmishers. I wanted them to look very motley, so I mixed a wide variety of tunic colors. 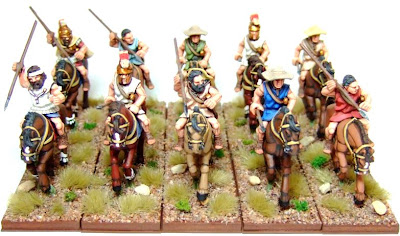 10 Greek Javelinmen
You can read all about the skirmishers in my previous post.

28 Greek Mercenary Hoplites
The hoplites are definitely the most colorful unit in the army. I varied the colors of tunic, linothorax armor, helmet crest, and shields.

14 Hypaspists
The hypaspists are the only unit in the bright pastel colors one usually sees in Macedonian wargaming armies. I'm unconvinced that the rank and file wore such bright colors as you see in various ancient sources (and in Angus McBride's artwork), but if any of the troops were so colorfully attired, surely the hypaspists would have been. I used a cream color for the linothorax armor, and a bright blue for tunics and helmets. Still, I didn't go nuts. Shields are pretty plain (apart from the bright decal), and plumes are all white. 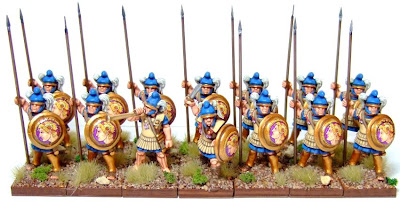 28 Phalangites
This is my biggest pike block, and all these troops have lovely plumes. I'm thinking of using these as asthetairoi. The shield designs on the officer and musician are from Little Big Men. 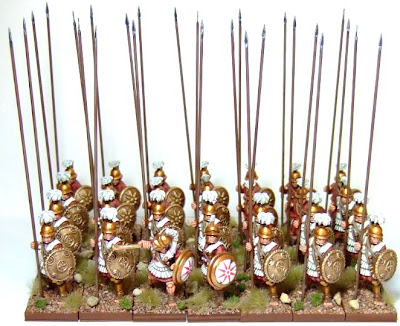 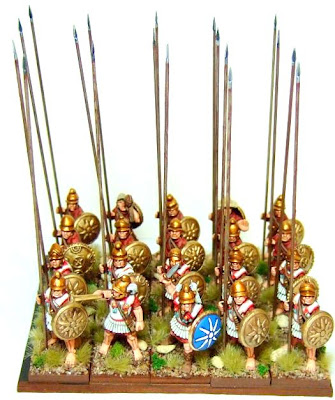 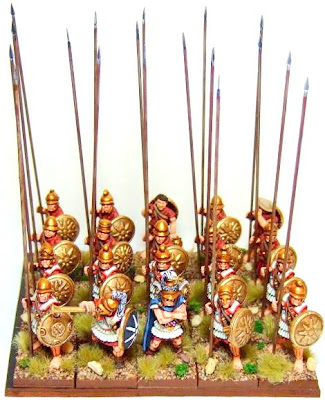 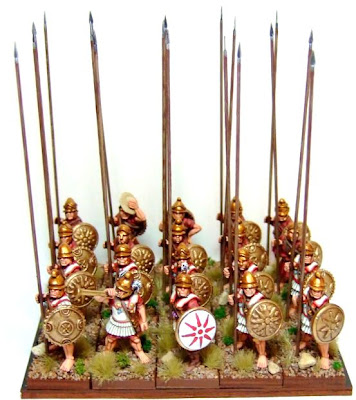 So there's the whole army. There are 130 close order infantry, 30 foot skirmishers, and 30 mounted men. As the army now stands, it comes in at about 2500 points. I may expand it more some day, but for now I'm calling this project complete.
Posted by Scott MacPhee at 9:48 AM