British Grenadier! has a pretty interesting casualty mechanism. Units start by taking disruption points (DPs), which they can accrue from rolling for movement, moving through difficult terrain, or taking fire. Once a unit takes three DPs, any more hits actually cause casualties. Units can rally off their DPs each turn, and unit quality and leader proximity make a huge difference in how well a unit can lose its DPs.
I've only played British Grenadier! in solo play with my 15mm figures, but I found that casualties were relatively light, at least compared to other wargames. Disruption plays a huge role in the game, as units lose effectiveness based on the number of DPs they've accumulated. Once a unit starts taking actual casualties, it usually doesn't hang around much longer.
The point of this long prologue is that DPs are very important to the game system. I wanted to create some markers that would be visually appealing, easy to handle, unobtrusive on the tabletop, and durable and communicate disruption level at a glance. With my 15mm figures I had used individual pieces of Woodland Scenics' talus, which worked alright, but I needed something a little bigger for my 28mm army. 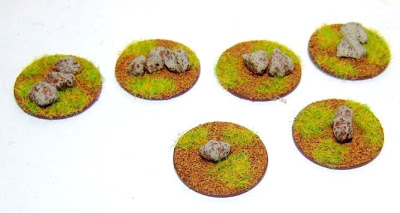 I took my inspiration from Giles at Tarleton's Quarter, substituting talus for the cork he used, and dressing the terrain up a bit. A white glue wash, two coats of gloss varnish, and one coat of matt should endure that the pieces can endure a lot of handling. I did 22 pieces for each disruption level. That should be enough for the entire Freeman's Farm scenario.
Posted by Scott MacPhee at 11:17 AM