Although the blog may have gone quiet, I'm still plenty busy. I'll be finishing Learned's brigade of Continentals (64 figures) in the next few days. Here are some shots of the brigade in progress. 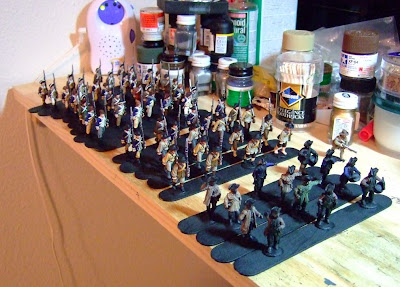 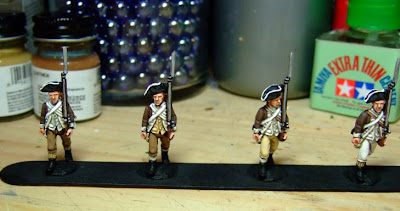 These neatly uniformed (for the Continental Army) figures are all bound for the 1st Canadian Continental Regiment.

Here's another figure for the 1st Canadian and three hunting shirted men for the three Massachusetts regiments.

These figures in shirtsleeves are bound for Massachusetts regiments.

This is all the progress I've made on the 1st Canadian command stand.
By the end of this week, I should have a completed brigade to show you. Then I have 15 riflemen, 12 light infantry, and a general to paint. Once those are done, I'm ready for Saratoga!
Posted by Scott MacPhee at 8:23 PM