I finished the last figures for my Saratoga army today, Dearborn's Light Infantry. 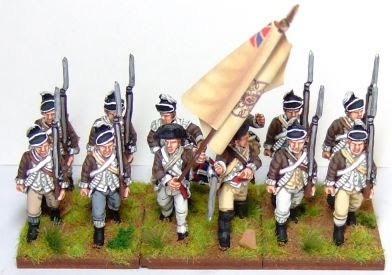 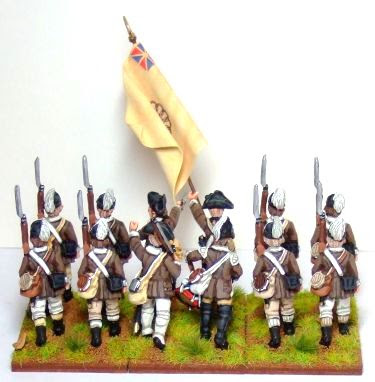 At only twelve figures, Dearborn's battalion is the smallest in my army. This battalion was composed by collecting the light companies from regiments throughout the army, so my figures are incorrectly uniformed for Saratoga. But I wanted a unit that could pass for light infantry throughout the war, so I went with one of the more common LI uniforms: brown with white facings. I also went with the light infantry cap with white lace. To do this, I had to use British figures in Saratoga dress, and I like the look of this unit a lot.
Here's Morgan's brigade at Saratoga.

Tomorrow or Wednesday I'll get up a shot of the whole army and consider the project in more detail. For now I'm just happy to be done.
Posted by Scott MacPhee at 3:10 PM