My part of the great Saratoga project is done. This was a group project between me, Austin, and Jon, with the three of us each choosing a different army for the First Freeman's Farm scenario from the British Grenadier! main rulebook. We set a tentative goal of finishing by Christmas. I took the largest army, the Continentals, which numbers 178 foot figures, 5 mounted figures, and one gun. Austin took the British, which numbers 165 foot figures, 4 mounted figures, and 6 guns. Jon built the Brunswickers, which consists of 73 foot figures, 1 mounted figure, and 2 guns.
Jon finished his troops a month ago. You can see his figures on his website. Austin is plugging along on his British, but it looks like he won't make our Christmas goal.
This was a fun project for me, and I went all out on figures, bases, and flags.
The Perry Miniatures AWI range has the reputation of being among the very best miniatures available, and the quality of the figures was a big reason we chose this period. We put together one of the biggest miniatures orders I've ever made, at least in terms of cost. Alan Perry was able to give us a big discount on shipping, which helped our bank accounts and made the project easier for my wife to approve.
I really enjoyed the Perry figures. At first I was a little overwhelmed by the amount of detail on the figures and the range of colors I needed to portray barely uniformed Continentals. As I worked my way through the army, I found that I was able to increase my painting pace. I never gave up painting all the detail, though, and the result is the best looking army in my collection. Perry Miniatures produces enough variety in Continental uniforms that I was able to field suitably scroungy looking units, with some men in full uniform, some in partial uniform, some in civilian coats, and some in shirtsleeves. There's a good mix of headgear, and I painted the waistcoats, breeches, gaiters, trousers, hats, haversacks, and coats in a wide variety of colors.
I broke from the rulebook a bit by going with 30mmx40mm Litko bases. Most of the General de Brigade series calls for 15mm frontage per 28mm figure. The British Grenadier! rules call for a slightly wider base to represent the loose order that line troops adopted during the American Revolution. I just like the look of shoulder-to-shoulder troops, and we figured that as long as all three of us based our figures the same, we wouldn't run into any problems. These smaller bases will also allow us to take better advantage of the limited gaming space that Austin and I have.
While Jon and Austin opted for the cheaper flags from Flags for the Lads, I splurged again and went with the beautiful flags from GMB Designs. I wish I could give you a link, but Grahame Black, GMB's owner, doesn't have a website. It's worth emailing him and asking for his flags list, though. At £3 for two flags, plus 10% shipping, the GMB flags are pricey. Still, they're heads and shoulders above anything else I've seen. I even picked up a few of his new 15mm flags (six to a sheet for the same £3 price) for future use.
GMB has enough varied designs in their AWI range that I was able to depart from the usual stars and stripes on a number of units. The 2nd New Hampshire got the actual flag they carried at the battle, and Dearborn's battalion got the alternate 2NH flag. The Connecticut militia carry a liberty tree flag. Many of the regiments have the flags with the Union in the canton, and there are two designs of stars and stripes. 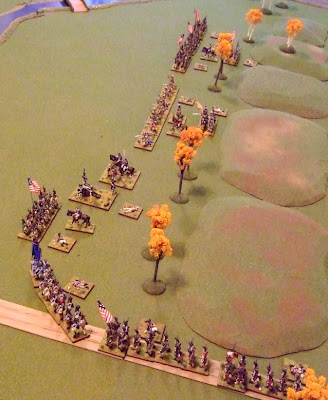 So what comes next? While it's always tempting to declare a period "complete," I'll probably be adding to this force so we can fight some more battles. Freeman's Farm is a small to medium sized scenario under these rules, and I'll need more figures to fight other scenarios. So I'll be expanding this army at some time. I've always wanted to fight Bunker Hill in 28mm, and my next AWI project will probably see me fielding both sides for that fight. Some of these figures may make an appearance, but I may start from scratch just to keep growing my American force. I know Austin is itching to fight Guilford Courthouse, which will require me to add more skirmishers, artillery and even some cavalry to my army.
When it comes time to dip into the AWI again, I may try some figures from other ranges. The Perry figures are beautiful, but they are expensive. I may try some Old Glory figures from their two AWI ranges. The price is right, and the figures look pretty good. I won't be able to get quite the same look, but I do like variety.
But all that is for later. Over the next few months, look for me to finish my 28mm ACW project and delve into some SYW French. I'll probably also continue adding to my 15mm Napoleonic Austrian army and return to my ancients armies. I'm working on some Spanish Scutari for Field of Glory right now.
Posted by Scott MacPhee at 10:20 AM