Fire and Fury has long been my favorite wargame. It was the first set of rules I ever played, way back in 1997. I bought my first metal miniatures for the game. My 15mm ACW armies are still some of my favorites. Every time I play Fire and Fury, I'm amazed anew at how smoothly the system plays and how well it balances tactics and luck. Sound strategy is generally rewarded, but the rules allow for the flukey events that define Civil War combat for me. Even the best plan can fall apart if the brigades don't roll well, and even the most suicidal attack has a slim chance of success.
When I was looking for a good set of tactical World War II rules, I tried quite a few sets before settling on Fire and Fury's Battlefront: WWII, which I thought gave the best feel for the period and most rewarded period tactics.
So it is with keen anticipation that I've been following the development of Fire and Fury: America's Wars, the regimental adaptation of the classic rules. It looks as though the rules will be released early in 2010.
Austin, Don, and Scott R. have played through a scenario using the free downloadable copy of the rules, and they liked them. They did have an aesthetic concern about the game, though. In these rules, regiments can be deployed in a single or double line, but double line is the default. So each base represents one rank of men. With our large Fire and Fury bases (1"x7/8"), a double line doesn't look like a line of battle, but like a supported line.
Austin suggested that we rebase some of our men with very little depth to make the regiment look better when deployed in two ranks. He settled on 25mm frontage by 15mm depth. I ordered the appropriate Litko bases last week, they arrived yesterday, and I started rebasing.
The figures you see below are the result. Each stand represents 40 men in the rules, so these are 280 man Confederate regiments. 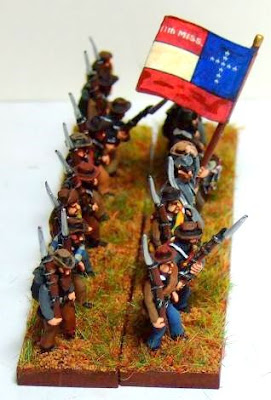 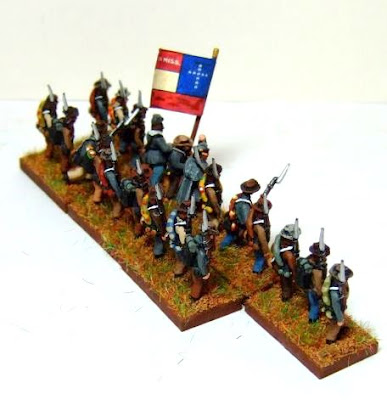 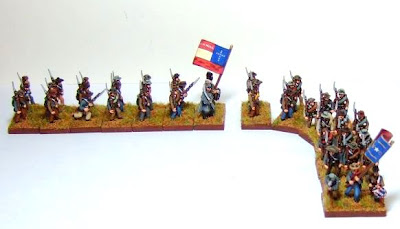 Posted by Scott MacPhee at 3:34 PM