While Austin, Don, and I put our order together, I dug around in my 15mm ACW spares box and found enough marching Union figures to put together a good sized brigade.

Almost all of the figures are Old Glory. There are a few Frontier figures mixed in, like the regimental color bearer and the officer above. 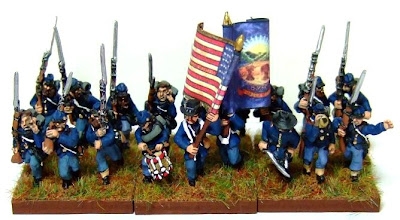 The Old Glory figures are full of motion. If anything, they're a little over-animated.

The bayonets are definitely oversized, and sometimes the break off, as with the figure behind the regimental colors. His bayonet didn't even survive basing. I imagine many of these men will lose their bayonets during game play. 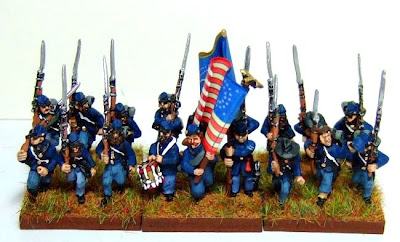 Old Glory figures have always been super cheap, though. I got these for about $.12 apiece a while back. By printing my own flags, I was able to make the entire brigade for $10.08.
Sometime in the next few days, we'll be ordering Battle Honors marching figures for the bulk of our forces. We'll be able to use the cavalry, artillery, and generals that we already have finished for basic old Fire and Fury.
Posted by Scott MacPhee at 10:37 AM