Don, Austin, and I went ahead and ordered 15 bags of Battle Honors ACW marching infantry, which will give us each 250 troops to paint. I had enough extra command figures already on hand to get a good start on my regiments.
The figures are a mix of Old Glory and Stone Mountain. Most of the flags are from Warflag.com, but the three rebel battle flags on the right are from GMB. 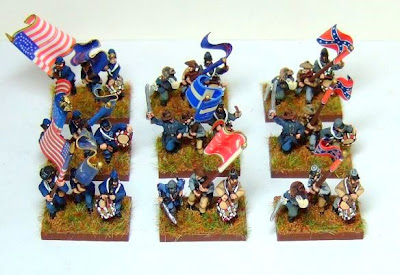 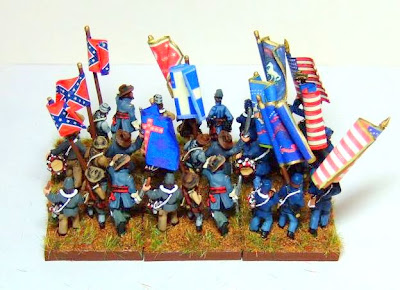 I spent a bit of time touching up the edges of the flags, and that led to touchups on the body of them as well.
I really enjoy painting 15mm ACW. You can see that I did give some of the figures the basetone and highlight treatment, but most of them are just straight block painted. I painted these 27 figures in about four hours, but I can beat that pace by working in larger groups.
I'm thinking of painting all 250 infantry in two large batches, one Union and one Confederate. With my figures primed six to a stick, that'll be 42 sticks of infantry. At 99 Federal and 150 Confederates, those should each be manageable as single pass projects. I'll see if I can't crank out 250 figures in one week!
Posted by Scott MacPhee at 2:49 PM