I'm building an Austrian army to fight the 1809 campaigns in Age of Eagles. I figured I would start with the Wagram OOB and adapt it to other battles. For Wagram, I need three brigades (5, 4, and 6 stands) of chevauxleger and one brigade (7 stands) of dragoons.

My buddy Austin (hello, Austin!) sold me some AB chevauxleger/dragoon figures he had, and I rounded them out with a few more figures from Eureka USA. These 44 figures took me over a week to paint, but I think they were worth the effort. 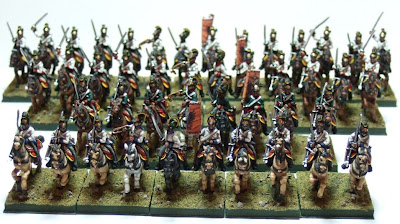 All four brigades from the front

All four brigades from the side

Closeup of chevauxleger in green and white coats

Closeup of dragoons in the back row

I usually use Old Glory or Battle Honors figures, just because they're so cheap here in the US. I often pick up Minifigs when I can find a deal on eBay. I like the Minifigs' uniformity. These AB figures were pricey. It cost me $63 for the bare lead for these four units. With Minifigs, it would have cost $51. With Battle Honors or Old Glory, it would have cost $27 (I'm part of their special buyers club).

The figure painter in me enjoyed these figures, but the frugal Scotsman in me will probably buy Old Glory next time.
Posted by Scott MacPhee at 1:18 PM