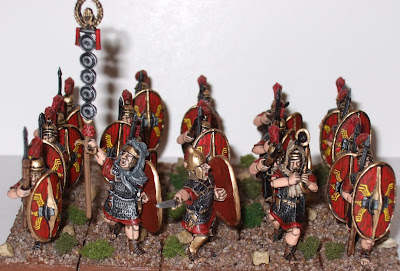 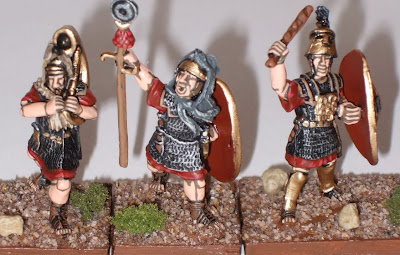 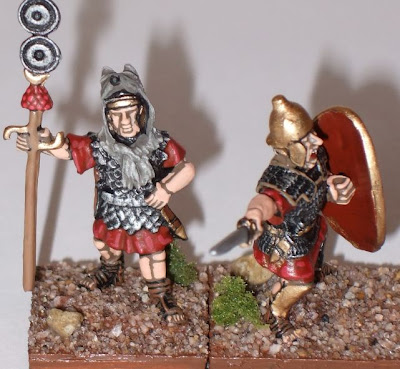 My next ancients project is to build an army for the Roman civil wars of 49-30BC. I ordered up some Old Glory legionnaires, and I was pretty disappointed when I opened the pack and looked at the figures. I'm an Old Glory fan, but even I have to admit that their figures frequently do not march, but scurry around the battlefield. These Romans seemed to have a bad case of the scurries. When my buddy got his Gripping Beast Marian Romans, I was pretty tempted to chuck the Old Glory figures on the lead pile and start over with Gripping Beast.

I'm glad I didn't. I have to remember to say to myself, "figures always look better with paint on them." And then repeat it three times. And then just paint the darned things. Because once I put paint to metal, these figures started to look really good.

The command figures are almost identical to the Punic Wars Roman command pack. Only the centurion with the vitis and the signifer with scale armor are unique to this pack. They're both nice figures, but I don't like the inclusion of a Corinthian helmet on the centurion. Surely he would have the same Montefortino helmet as the men

Posted by Scott MacPhee at 7:13 PM