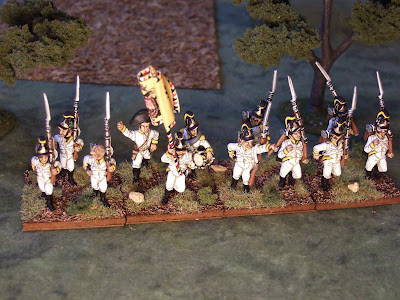 I painted the uniforms with Delta Ceramcoat Mudstone and highlighted with white. I mixed my own flesh undercoat from Territorial Tan and Dark Brown, then highlighted with Medium Flesh. The backpacks got a base of Brown Iron Oxide and a drybrush of Autumn Brown. To really make the metals pop, I used Testors silver for the muskets and swords and Testors gold for the brass work.
Posted by Scott MacPhee at 10:15 PM