I took advantage of the Old Glory 15s prepacked sets and bought some Field of Glory armies. This is the "Later Carthaginian" army from the "Rise of Rome" book, suitable for the Punic Wars. The army contains: 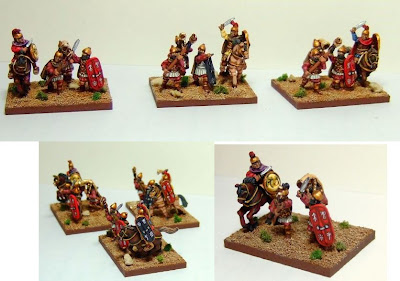 First up are the army's three generals. Field of Glory calls for these to be cavalry bases, but Old Glory gives you three foot command and one mounted general per base. I've found that the cavalry general bases tend to blend in with the army during a game, so I really like Old Glory's approach to generals. These command bases stand out, making your generals easy to spot. 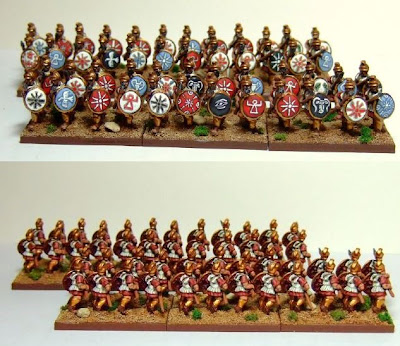 Here are the African heavy infantry, the solid core of Hannibal's army. I gave these men a pretty uniform look, going with simple white linothorax armor and blood red tunics. The shields really make these units pop. I went with a wide variety of designs. 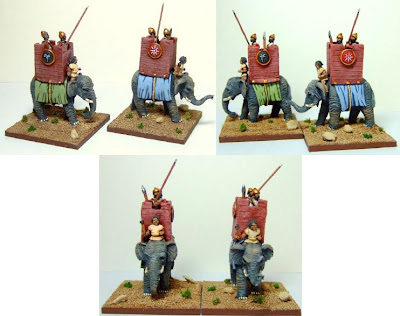 I had never painted 15mm elephants before, but I have painted a few elephants for my 28mm army. Old Glory provides two different heads, which really make the elephants come alive. This might be my favorite unit in the army. 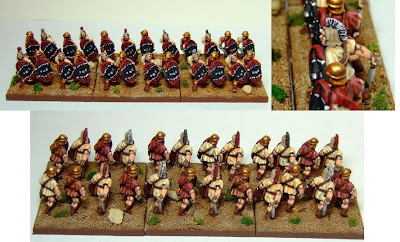 FoG classes Spanish scutari as medium foot. I didn't want these men to look as uniform as the African infantry, so I varied their tunic colors and helmet crests quite a bit. Their shields got a uniform design to make them look semi-professional. I was careful to paint the bands on the sinew helmets. 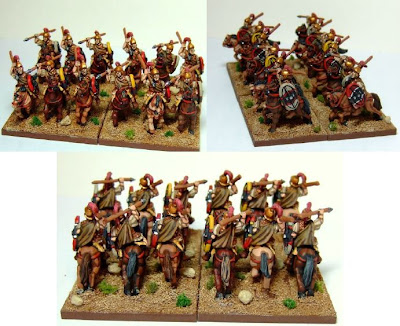 The Spanish heavy cavalry got a mix of shield designs, but uniform tunics and horsehair plumes. I painted the horse tackle in the famous Spanish crimson. The cloaks on these figures had a lot of deep relief, which made it very easy to paint good looking folds. 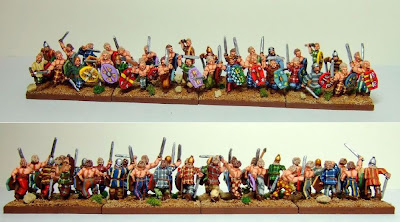 The Gallic contingent provides the most color to Hannibal's army. I painted checked and striped designs for the clothing, and I really mixed it up so no two soldiers are alike. The shields got a wide variety of colors and ornamentation. No two shields are alike either. These swordsmen are heavy infantry. Between their dress and their shields, they look like an undisciplined, but savage, body of warriors. 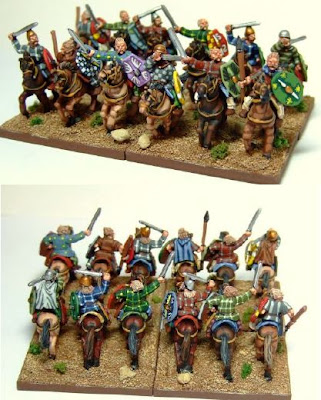 The Gallic cavalry got the same treatment as the infantry. I painted the horse tackle in a natural leather color. The only quibble I have with Old Glory's packaging is that I got four copies of the same pose (the fellow stretching his sword forward). 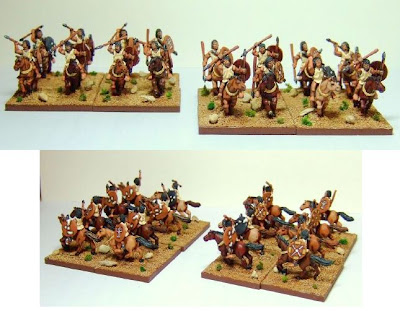 I have to admit, I love painting Numidian cavalry. I used the exact same technique on these 15mm figures that I did on my 25mm Numidians, and it worked just as well. The 15mm packs came with quite a few poses, which really makes the Numidians look like a swarm of undisciplined light horse. 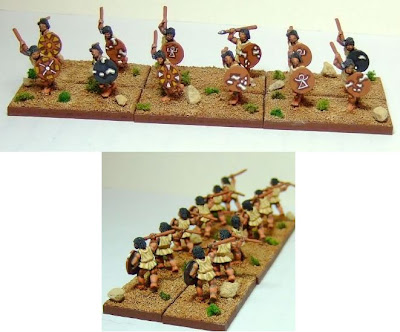 The Numidian javelinmen are plain figures, so I went all out on shading the unbleached linen tunics. The shield designs help make the figures more visually attractive. 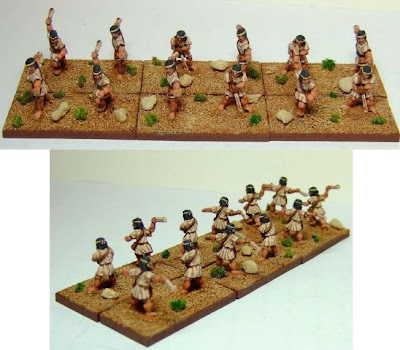 The Balearic slingers also got the full treatment on their unbleached linen tunics. I painted slightly different shades for the Numdians and Balearic islanders. Even though the figures don't have a lot of ornamentation, these are two of the best looking figures in the army.

All bases are Litko. I spent a pretty penny on bases for the 15mm FoG armies, but I think Litko bases are always worth the extra money.

To flock the bases, I used Woodland Scenics light brown fine ballast, which I secured to the bases with a white glue wash. I then drybrushed the ballast with Delta's "latte" to make the dirt really pop. I glued tallus and clump foliage to break up the dirt a bit and add some color.

All told, the army has 137 foot, 43 mounted, and two elephants with six crew. I'm painting these for sale, so if these catch your fancy, email me and we'll negotiate a price. I usually get between $4-$5 per foot figure and between $8-$10 per cavalryman when selling on eBay, so I figure this army is worth somewhere between $900-$1,150. But I am willing to budge a bit on that number.

The Old Glory figures were a joy to paint. These are proper 15s, exactly 15mm from bottom of foot to eye level, so they can't carry the amount of detail of Xyston figures, but they come very close.

I'm very impressed with the army packaging. It lets me build a FoG army without having to worry about excess figures, and it actually costs less than buying the figures in their normal bags. Now I have four more armies to paint: Punic Wars Romans, Marian Romans, Gauls, and Alexandrian Macedonian.
Posted by Scott MacPhee at 8:28 PM