It has been a while since I updated the blog, but I have been painting like mad. I took advantage of 19th Century Miniatures' sale to buy some of their prepackaged Field of Glory armies. I plan to paint these for sale. I saw a company advertising painted FOG armies on TMP for $800 or so, and I think I can paint them better.

I bought five armies: Late Carthaginians, Polybian Romans, Marian Romans, Gauls, and Alexandrian Macedonians. 19th Century sells Old Glory ancients in packs of two elephants, nine cavalry or 24 infantry for $9.00. That works out to $.375 apiece for infantry, $4.50 apiece for elephants, and $1 apiece for cavalry. In the army packs, we actually get a better deal than that. The Carthaginians, for example, come with 140 foot, 43 mounted, and two elephants. At regular prices, that would run $104.50. The army pack sells for $95. Until the end of November, you can get them even cheaper than that by taking advantage of the 30-40% off sale. 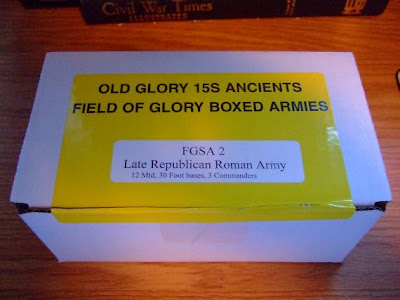 I've broken the seal on this box to examine the figures, but this is how the armies are packed. It's a nice, solid box, very handy for storing the army until I get around to painting it. 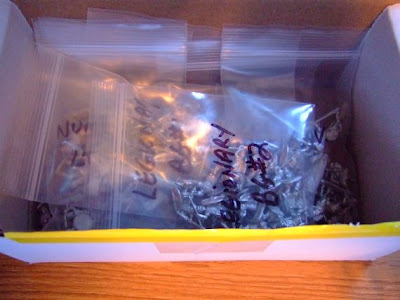 Here's what's inside. Each battlegroup comes in its own labelled ziploc bag. The figure counts are exact. I counted through every single bag in all four armies to make sure I didn't get shorted any figures. 19th Century even gives you four figures per base for medium infantry, which the rules list as optional (three figures per base is standard). 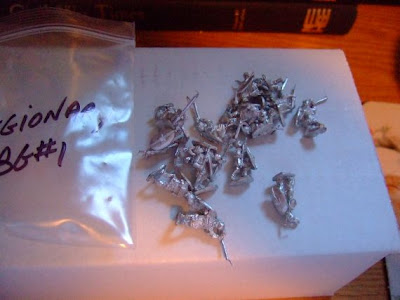 The figures themselves are very nice. Old Glory can be hit and miss, especially in the 15mm line. I bought a huge lot of ACW figures when I first started gaming in metal, and they almost sent me scurrying back to plastics. Fortunately, I bought some samples from other ranges and found that OG does make some nice 15mm figures. You've seen some of their Napoleonics on this blog, I'm sure.

The OG ancients I got are universally good. Xyston probably makes the best 15mm ancients, but they have their own issues, namely the scale creep that makes figures within Xyston's own range incompatable with each other. These OG figures all work well together, and they look the part. The only other ancients range of OG's scope is Essex, and I just don't like the gnomish look of Essex figures.

I've been painting Carthaginians this week. I painted 48 Libyan spearmen, 24 Spanish scutari, 12 Numidian javelinmen, and 12 Balearic slingers. I'm working on 32 Gallic infantry right now. Once I'm done with them, I'll move on to the cavalry, elephants, and generals. I've been having fun detailing the shields and painting highlights on tunics and armor. This should be a great looking army.
Posted by Scott MacPhee at 1:11 PM