I tinkered a bit with the bases, moving bases from unit to unit to see if I could get the figures to rank up. I can't quite get the bases to touch, but I can get them closer with some creative shuffling. 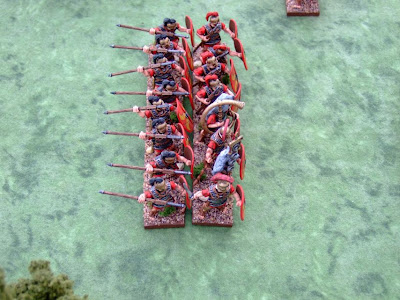 Keeping the throwing poses in the rear rank is a must. Their shields still touch the front rank's elbows, but the butt ends of their pila just project into space. 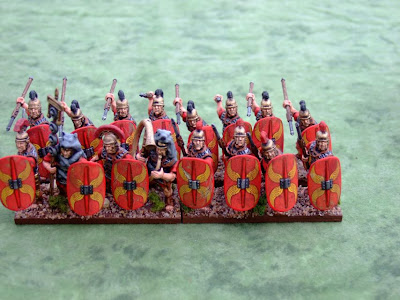 From the front, you can't even tell there is a gap between ranks. Looking at all three units from wargaming distance, you can see the gaps a little, but they still look pretty nice. 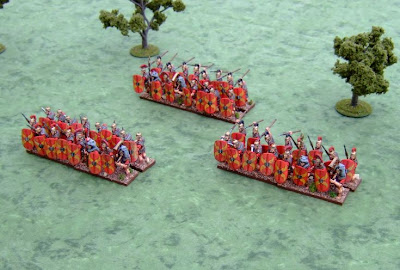 So what's the final verdict? You've seen enough to form your own opinion, honestly, but for whatever it's worth, here's mine.

This is an impressive first effort from Wargames Factory. All summer long, TMPers were calling these "vaporware." Tony had posted computer renderings of the figures, but Wargames Factory hadn't actually produced any yet. They've produced them now, and the figures are very attractive.

I read the naysayers writing that the figures would have huge seams on their shoulders and under their arms. You can see here that they have small seams, as all figures do, but they're not very noticable. The shoulders look good, and the area under arms is covered by, well, arms.

There were concerns that the plastic would prove brittle. It hasn't. These are durable figures that will survive rough treatment.

But these figures do have some unanticipated drawbacks.

1. The construction time was a killer. Wargames Factory could reduce it by making the heads and shield arms part of the body, but that will only reduce it, not eliminate it.

2. The figures have pretty shallow detail. It was most obvious on the wolfskins and chain mail, but it also made the faces, plumes, and sandals more difficult to paint. In fact, I had to change my approach to painting sandals. Usually I just drybrush a light brown over black primer, but with these figures I actually had to paint each sandal strap.

3. The shield transfers don't cover the entire shield face. I had to try to match colors for the shield edge, and the different shades of red proved too much for me. Wargames Factory could produce shields with metal edges, or they could produce transfers just for the design rather than the whole shield face. I would prefer the latter. Then I could paint the whole shield in a reddish brown, rub on the wings, and paint around them with bright red, leaving a small gap of red-brown between the wings and the bright red.

4. The figures don't work well as a unit. For me, this is the set's biggest flaw. As I wrote in the previous piece, you can get the figures to rank up, sort of, as long as you don't want the bases to actually touch. You could use bases with a 30mm depth instead of 20mm. That's probably the best solution. But it does seem odd that figures marketed under the Field of Glory name don't fit well on Field of Glory standard bases.

So overall, these figures are what they are, which is a good first set from a company still working out some of the kinks in their process. The consumer pays only $0.62 apiece for these, which is about the same price as Old Glory, as long as you pay $50 a year to join the Old Glory army. And the Wargames Factory figures are higher quality. I like Old Glory. I've painted an entire WAB Marian Roman army from Old Glory figures. But if I were starting all over again, I would find a way to make the Wargames Factory Romans work and use them.
Posted by Scott MacPhee at 3:30 PM