This past Saturday the gaming group got together for an "Age of Eagles" Napoleonic battle. Austin hosted and I provided the figures, so we were both in on the secret: we would be using Napoleonic armies to refight the first day of Gettysburg! 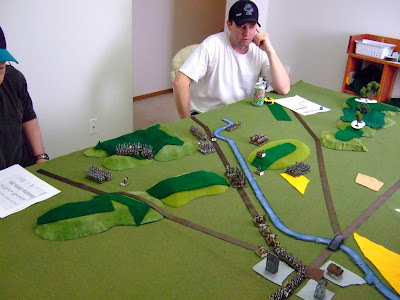 Don and Scott R. took the French and immediately took the offensive, just as Harry Heth did on July 1st at Gettysburg. 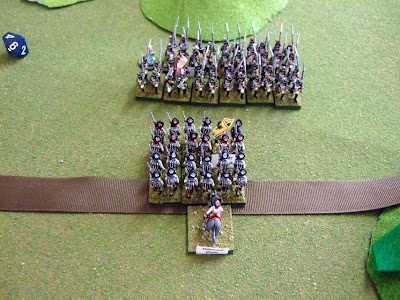 Don's French infantry pushed the Austrian grenadiers hard, chipping away a few stands very quickly. This was the Austrian Iron Brigade, and it played very little part in the battle after this. 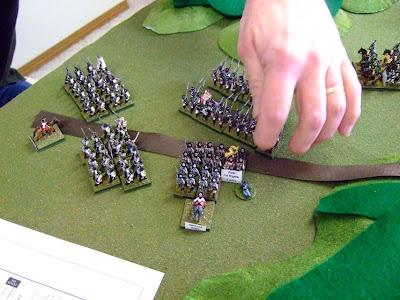 In pushing back that brigade, however, Don exposed himself to a counterattack that wiped out the French equivalent of Pettigrew's brigade. The fighting in this picture is taking place between McPherson's Ridge and Seminary Ridge, and the battle lines would move back and forth through this little valley all day long. 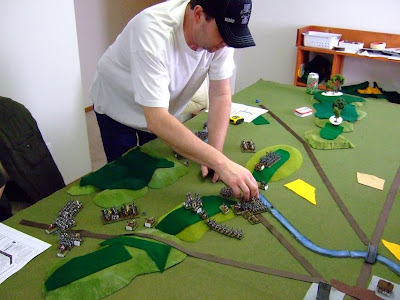 When the second French infantry division arrived, Scott R. pushed his lead brigades against the Austrian line and broke it. One French brigade lunged for the town . . . 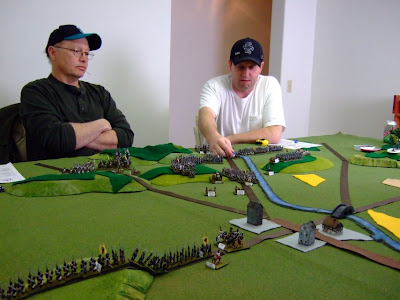 Just as the Austrian XI Corps arrived on the table. This was one of the crisis points of our battle, with the Seminary Ridge line shaking under pressure and the French looking like they would sweep the field. 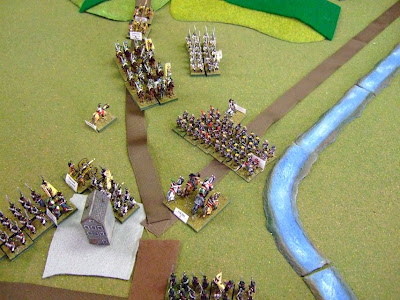 The loss of that large French infantry brigade made it possible for the Austrians to detach strength from their left and scurry back to defend the town. The attacking French brigade wrecked two Austrian brigades, but it never did get into the town. 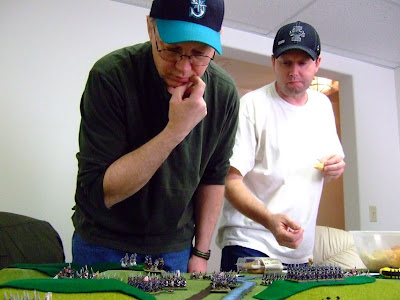 As Scott R.'s attack stalled, Don threw the French against Seminary Ridge once more. For the second time, the Austrian infantry held. Those woods provided a good defensive bonus, and I had attached commanders to every Austrian brigade to give them a little more sticking power. 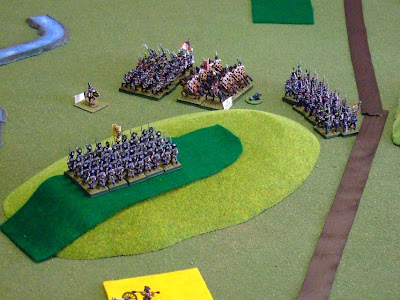 On the north edge of Seminary Ridge, a lone grenadier battalion (the equivalent of Cutler's Brigade) and a brigade of chevauxlegere held of an entire French division all day. Unable to charge cavalry, the French infantry had to content themselves with moving up into musket shot and attempting to shoot stands of cavalry away. It didn't work very well. 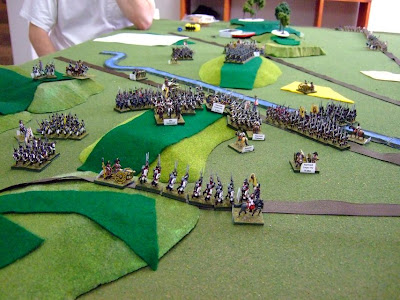 By midafternoon the French III Corps was ready to try Seminary Ridge again. For a third time the Austrians held and repulsed them. Don tried to swing one French brigade around the Austrian left, but one brigade of Austrian line infantry made a valiant stand, repulsing several French attacks, even while the taking severe losses. This brigade was the equivalent of Paul's Brigade, 2nd Division, I Corps, but it fought more like the Iron Brigade.
In the distance of this shot, you can see the French II Corps arriving on the field, marching into the Austrian right and rear! While Don took over the remains of French III Corps, Scott R. commanded this new force. 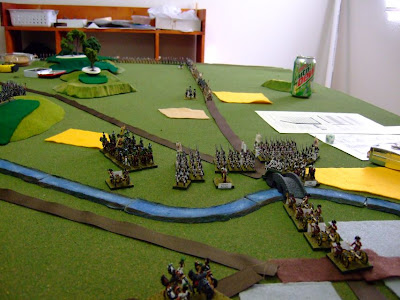 Austin maneuvered the Austrian XI Corps into position to protect I Corps's flank and rear. 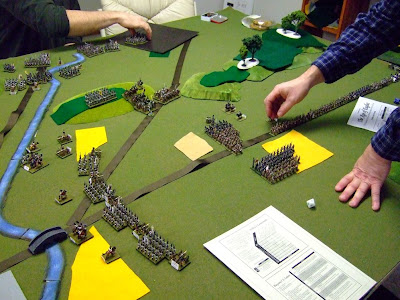 Scott R. took his time, waiting for the entire II Corps to get in position before he would launch his attack. Austin and I massed batteries again the French right, and Austin sent a brigade of cavalry in to upset the French dispositions. 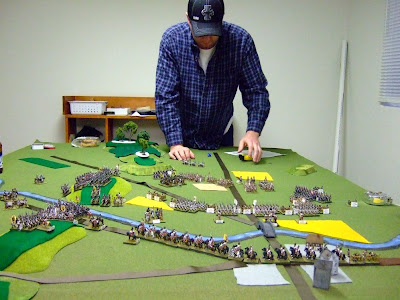 By early evening, Scott had the II Corps where he wanted it and lunged for the Austrian right flank. He destroyed one Austrian brigade, and at one point only two silenced batteries stood between him and the town. 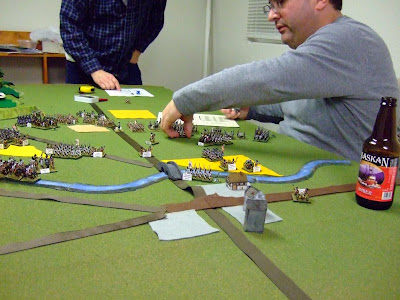 Then the Austrians pulled off an incredible coup. After an entire day of losing initiative rolls to Napoleon, the Austrians won one and earned a double move. Austin was able to counterattack with XI Corps, wrecking a French division. I used some Austrian cuirassiers to destroy the only French cavalry unit on the field. The French attack petered out and the day's fighting was over. 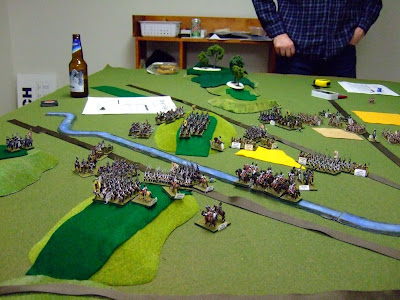 Here's how the lines stood at the end of the day's battle. The French lost something like 70 infantry stands to the Austrians' 25. Both sides had similar losses in guns and horse.
This was a mammoth game. We started at 10:30AM and finished at 9:00PM with a break of about 90 minutes for dinner. The scenario was balanced enough that the French had a chance of winning right into the final turn. Austin and I had a big advantage in that we knew this was really Gettysburg and could plan our strategy accordingly. We also got pretty lucky in that two of our infantry brigades and one cavalry brigade fought like heroes all day.
Don and Scott fought very aggressively, and the result was one of the better Napoleonic battles we've played.
Posted by Scott MacPhee at 10:11 AM