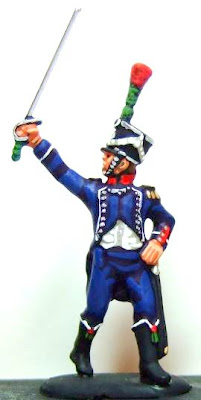 There are more figures on the sprue, which you can see here. I chose not to paint the pioneer, standing sergeant, or mounted officer.
The figures have pretty good detail and the poses are very natural. I elected to replace the eagle staff with brass wire, and the HäT plastic responded well to my pin vise. The officer's sword was far too short, but that will probably be worked out before the figures go into production. I replaced the stubby sword with more brass rod, hammered slightly flat.
Set 28004, "Napoleonic French Chasseurs Marching," was the one I was really excited about. Here are the painted figures.

There are eight figures in four poses on each sprue, and the poses are all perfectly usable! These figures should rank up very well. Some of the bayonets were a little too short, but again, I expect this is just the nature of test shots. I left most of them alone, just replacing one completely missing bayonet with some stretched sprue.
Although these figures are labelled chasseurs, which are the center companies in Légere battalions, they could easily be used for the elite companies as well. Many, perhaps most, Légere regiments kept the same basic dress for their flank companies, merely distinguishing them by different colored collars, plumes, and shako cords.
Still, HäT has provided carabiniers in bearskins and voltiguers in colpaks, although the pack composition is not all I could wish. Most of the figures are skirmishing, and the only marching poses in the two packs are those pictured below.

Because of the pack composition, you'll only get eight marching voltiguers or 16 marching carabiniers in each pack of 48.
I absolutely love the proportions of HäT's figures, and the overall look is just excellent. And to top it all off, at $.40 per figure, these figures are cheaper than anyone else's. The big question remains: how well will these figures work on the wargaming table? Will they look too slight to mix with beefier metal figures? I'll be basing my Légere battalion tomorrow, and I hope to have some pictures up soon comparing these HäT figures to my 28mm Old Glory Napoleonics.
Edit: HäT just emailed me and confirmed that the stubby sword and bayonets on these figures have been fixed for the production run.
Posted by Scott MacPhee at 9:58 PM