I know it's been a long time between posts. I've been working on some figures for a commission, so I haven't painted anything for myself in some time. I've also been busy with a couple of 1/35 scale armor models, and when I posted some shots of my armor models here in the past, I've received almost no comments. If you're interested in seeing my work, you can find it on my club's website. I'll keep this blog dedicated to wargaming figures and games.
So here are some wargaming figures, then. These are the HäT French light infantry I reviewed in my last post. I wrote that the only major drawback to the figures is that it'll be tough to find other ranges that work well with them. HäT disagreed and wrote asking me to show the figures in a wargames setting, mixed with other ranges.
First, here are the French light infantry by themselves. I mounted the figures on 30mm frontage by 40mm depth, with four figures to a stand. This is the same basing I've used for my 28mm AWI and ACW armies. 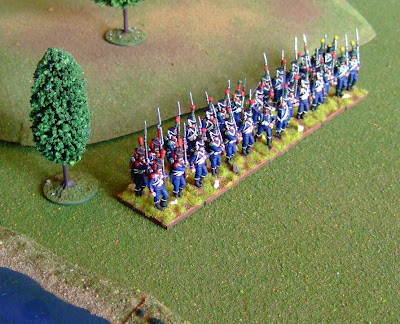 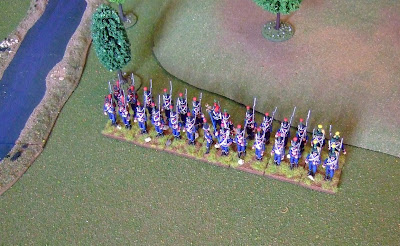 Now here are some shots mixing the HäT figures with some from other manufacturers. 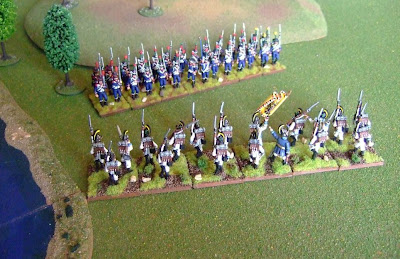 These are first edition Old Glory Austrians, and they look huge compared to the HäT figures. Part of that may be the effect of the lower figure density on the Austrian side. They're mounted three figures on a 1.5" square base. 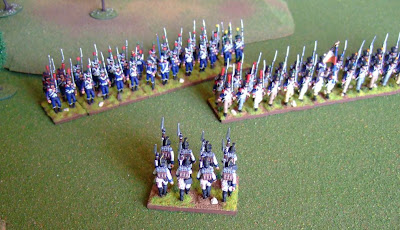 So I tried more figures based on 15mm frontage. These are Crusader French and Old Glory second edition Austrians, and now the HäT figures work just fine. I will happily mix these units on the table. 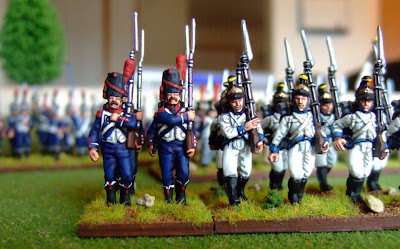 You can never have too many comparison shots, right? Here are the HäT French with the Old Glory second edition Austrians. Note that the HäT figures are at least a half a head taller than the Old Glory figures. 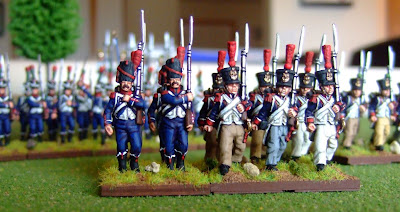 And here are the HäT compared with Crusader. Again, the HäT figures are half a head taller. I include these comparison shots because the slender proportions of the HäT figures must create an illusion of shortness. I got a couple emails on my last review taking me to task for not pointing out how short the HäT figures are. Well, they're not short. They're a little taller than most 28s.
Posted by Scott MacPhee at 10:24 AM