On Saturday the fellows came over to my place for an 18mm Napoleonics game.  We used General de Brigade for a hypothetical meeting engagement in Austria.  I was only able to take one picture of the game before my camera died, but this picture does show the terrain the troops fought over. 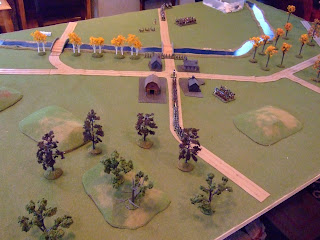 A French cavalry brigade (on the other side of the river) has bumped into an Austrian brigade of jager, hussars, grenzer, and a line battalion.  The French have orders to clear the road over the bridge and through the town so the rest of the army can march through.  The Austrians have orders to retard the French movement by holding the town.

The French had a strong division with eight infantry battalions, all line and veteran, and two large line hussar regiments.  The Austrians had a much weaker force, with a mix of smaller hussar regiments, irregular troops, and 2nd line infantry.

I designed the scenario to have variable reinforcements and variable arrival points, but it turned out that all the troops arrived on time and in fairly predictable spots.  The river was fordable everywhere, but troops had to make a die roll to cross, with chances improving each turn.

The rest of the battle played out as a series of French attacks on the Austrian line.  Jon's initial brigade, down its hussar regiment, lost its grenzer as well and failed its brigade morale roll.  Kevin's hussar brigade and his leading French infantry brigade also lost heavily and failed brigade morale rolls.

Jon has written up the battle with more pictures on his blog (here).

I like the rules, but every time I play them, I find more things I am doing wrong.  I think the only cure is to play more tactical Napoleonics!  The rules have enough heft to them that I can catch glimpses of their complexity without fully comprehending it.