It's winter in North Idaho, which means I cannot prime figures very easily.  Usually I set aside a warm day in October to spray a few hundred figures, and that sees me through the cold months.  This year I simply forgot.

So instead of finishing projects, I will have to go back and revisit some old ones.  I do have a few hundred odd figures that got primed and then, for whatever reason, set aside. 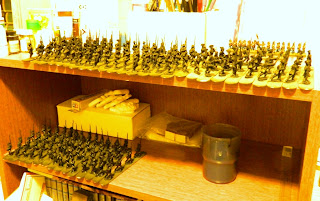 Like these 150 AWI figures, all first edition Old Glory, all march attack Continentals.  I had primed these about three years ago, ready to paint them once my buddy had finished his British Army.  Of course, he never did get those Brits done, and these Continentals have been sitting on a shelf since then.

I have a few ideas for these guys.


I'm really torn between these three.  I have all the GMB flags ready to go for option one.  These figures are in a mix of headgear, pants, and equipment, so they seem to me a good fit for Continentals.

The second option is tempting, as I could start playing some AWI games right away.  I have other figures I would rather use for British, but these will do in a pinch.  The problems I see are that I have no idea what uniforms the loyalists would have worn.  I assume they would have tried to present as British an appearance as possible, but that they would not have been high on any British supply officers priorities.  I also do not know what colors they may have carried in the field.

The third option combines the strengths and weaknesses of the other two.

It's a dilemma.  Or rather a trilemma.