I have enjoyed Blue Moon's Civil War and Napoleonic figures so much, I though I would see how their ancients look.  These are from packs 15RAE-115 "Roman Legionaries Command" and 15RAE-117 "Roman Legionaries Advancing with Gladius." 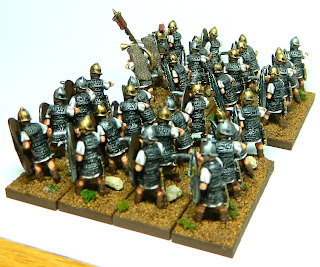 The bases are the standard DBx heavy infantry bases, 40mm frontage and 15mm depth.  Although these figures are larger than most (17mm from sole to eye), they fit comfortably on the bases.

I really like these figures, and I have wanted to seriously game Caesar's Gallic Wars for a long time.  I have no idea what rules I would use with 15mm figures, but these are nice enough to tempt me.  I picked up some Gauls in the same order.  If look as good with paint on them as these do, I may have to start scouting out rules.
Posted by Scott MacPhee at 3:07 AM