Jon and Austin joined me today for a run through of the "Guns at Gettysburg" rules. I have played its sister rules, "General de Brigade" and "British Grenadier," and I think GaG may be the set of tactical ACW rules I've been looking for.

We played the Belmont scenario from the "Heartland" scenario book. Grant, with two green brigades, must burn the Confederate camp at Belmont. The terrain is heavily wooded, and most of the rebels are in line of battle in a large field.

Rebel Defense (click on all pictures for larger images)

This is the main rebel defense, three regiments and a battery. At this stage of the war (November of 1861), the regiments were huge! Most CSA regiments were 32-36 figures, representing 640-720 men.

My Civil War armies are mostly made up of Musket Miniatures figures, although I have many Old Glory, Battle Honors, and Stone Mountain fixed in. I also have two Confederate regiments made up of Peter Pig figures. 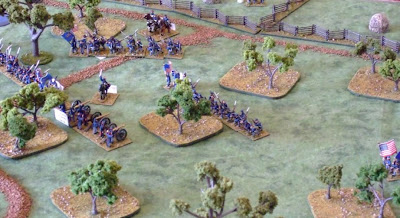 McClernand's Approach
Jon had command of McClernand's brigade. His lead regiment came under artillery fire as it moved along the road, causing the division to revert to "hold" orders. Jon quickly shook his brigade out into line. The CSA artillery then took the Union guns under fire. Although Jon kept pushing the Union guns to the front, they were never able to unlimber and return fire. 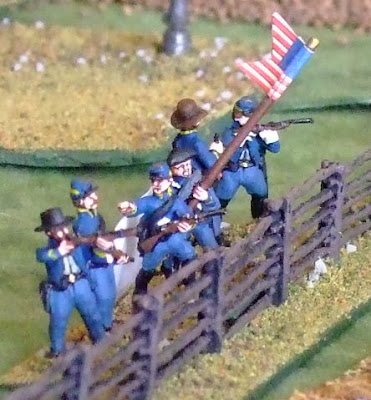 Union Cavalry
The Illinois Cavalry detachment dismounted and formed a skirmish line at the edge of the field. 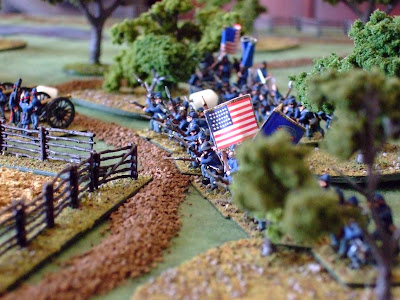 Grant gave McClernand orders to "engage" the enemy brigade, and Jon's regiments took the Confederates under fire. Austin commanded the Confederates, and he made up for weeks of unlucky dice in this one game. Jon and I managed to roll low all game. Austin also managed his regiments skillfully, refusing his right and extending his left to turn the Union right. 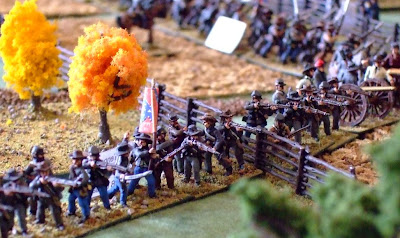 Austin refused his right and poured a devastating fire into the Union regiments. The Confederate troops were mostly militia, but there were a lot of them, and they fired like veterans! I made a mistake in computing the fire modifiers, counting the Confederate militia as green troops, but the way Austin was rolling, it didn't make much difference. 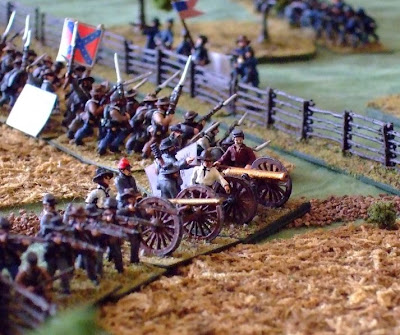 Confederate Battery
The linchpin of Austin's defense was his single battery of four six pounder smoothbore cannon. These green gunners scored hit after hit with canister. First they inflicted heavy casualties on Jon's infantry, then they inflicted fifty percent casualties on the limbered Union artillery. 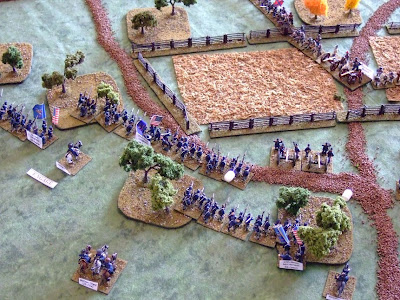 Grant's View
BdGen Grant, on the white horse, watched his regiments take a pounding. Both of his brigades have "engage" orders, but the Union infantry is having a difficult time hitting all those Confederates in the open. 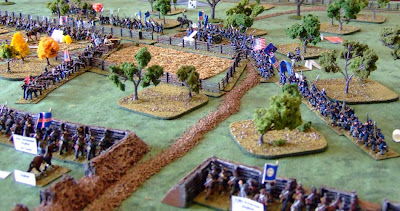 Dougherty's Attack
Dougherty's brigade, which I commanded, moved to fire on the Confederate line. Although not as roughly handled as McClernand, Dougherty was taking fire from two directions. At the top left of this picture, you can see McClernand's right starting to fall back. The green Union troops retreated under Austin's heavy fire.

With McClernand's line crumbling, Confederates working their way around the Union right, and Dougherty failing to make any headway, Grant decided to fall back. The Confederates held the field.

This was our first time using the GaG rules, and we certainly made some mistakes. Still, I think the rules made for a realistic game. I'm excited to try them again and see if attacking troops can make better headway with more even dice rolls.
Posted by Scott MacPhee at 5:28 PM