This is a tough review to write. Through its 100 and 300 clubs, Eureka has built up quite a bit of goodwill in our little community. Both Eureka and Eureka USA are run by great guys who provide outstanding customer service. Both are great promoters of the hobby. So it feels wrong to write such a negative review of one of their products.

A couple months ago the guys and I were talking about Eureka's Seven Years War line. Jon and Austin both have figures from Eureka's Prussian range and enjoy them a lot. But Eureka had just released its Russian range, and the pictures of the recently released Russians were . . . interesting. The figures looked like orangutans dressed in vaguely Russian uniforms.

And yet everyone who reviewed them online wrote how great the figures were. Was it possible that we were wrong? Did the figures just not photograph well? I decided to take one for the team and order a sampler of the new line. 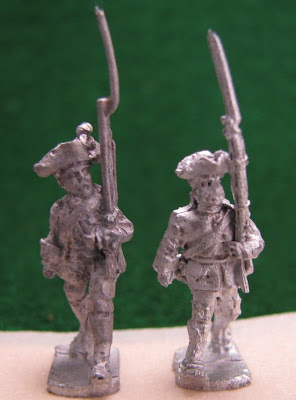 Eureka Prussian (L) and Russian (R)
Austin actually made the order, and when he got the figures, he immediately took some comparison shots. Those are both Eureka figures. They just don't look at all compatible, do they? The Russian is a half head shorter than his Teutonic playmate, and much more slender. 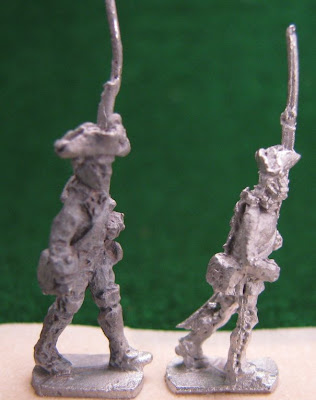 Eureka Prussian (L) and Russian (R)
The side view shows just how spindly the Russian figures are, especially in comparison to the beefier Prussians. Now I know that soldiers come in different sizes. I was a soldier myself, and my squad had one 5'4" soldier and one 6'4" soldier. True, they looked funny together. But their equipment was the same size. Look at the difference between these two soldiers' hats! That's not a natural variation in human size, but a difference in figure scale.

I was disheartened by these figures in the raw lead, but I know that a good paint job can hide a multitude of sins. Maybe these figures would look better once painted? Maybe they would work well together once they were mounted in the ranks? 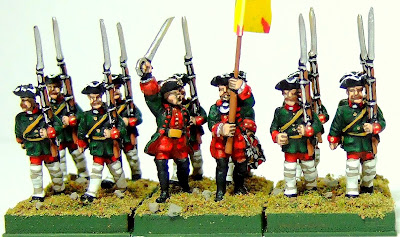 Russian Musketeer Regiment, Front
Yup. Paint jobs help. From the front, these figures look pretty good. Sure, those legs still look off, and sure, those impossible lantern-jawed heads have a simian feel to them, but these might work. 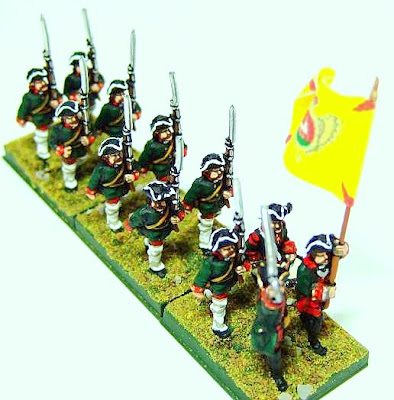 Russian Musketeer Regiment, Front
They don't work as well in a more typical gaming view. Those lantern jaws are much more visible and bothersome. 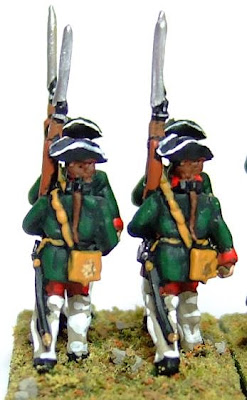 Russian Musketeers, Back
They look OK from the back. Not great--there's definitely something off about the shoulders and neck--but OK. The cartridge box had some detail on it, but not enough to let me really do detailed brass work. 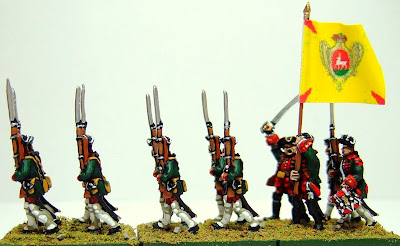 Russian Musketeer Regiment, Left
Ouch. Here's where the figures' flaws are most noticeable. Those legs just don't look right. I don't know enough about sculpting to say exactly what went wrong here, but it looks to me like the legs are of uneven size and have the knees in the wrong places. 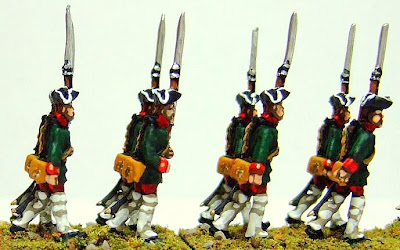 Russian Musketeer Regiment, Right
From the side, these are really ugly figures. They just don't look like people. 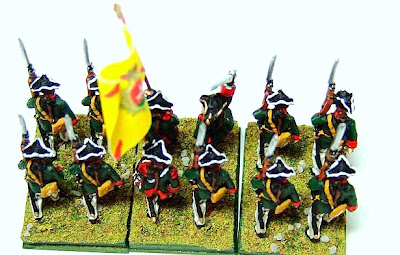 Russian Musketeer Regiment, Top
I have not painted much SYW, but I have painted a few hundred AWI figures. I know that neatly painted hat lace can make a figure really pop. The problem with these figures is that the hat brim is uneven. It dips, it folds, and worst of all it sometimes has little breaks. It makes it incredibly tough to paint the stinking lace on these figures. I'm a fair hand with a brush. I can at least paint a straight line. But here the figures frustrated me.

I really can't recommend these figures at any price, let alone at the price of $.63 apiece. There are many nicer Russians out there. I have some Minifigs Russians that I'll paint up and review soon, and they look much better than these.

So after my experience with these figures, I really wonder: why all the love for Eureka's Russian line? It perplexed me when I saw the figures online, and it perplexes me still after I've painted them myself. Eureka is a great company, run by great people, that usually puts out a great product. But these Russians are ugly, ugly, ugly, and no amount of goodwill can change that.

UPDATED: A couple people have pointed out to me that I incorrectly painted these guys as though they were wearing the winter jacket, although the figures are sculpted in the long sleeved waistcoat. It's a fair critique. I have just one source on SYW uniforms, the two volume "Lace Wars" by Funken, and they have one plate and two paragraphs for Russians of the SYW. Still, I did know that Russian infantry wore the waistcoat alone in summer. But these figures threw me, since the infantrymen clearly had large cuffs. I assumed they were wearing the coat with closed lapels. I would say that I'll do them right on the next batch, but there's not likely to be a next batch.
Posted by Scott MacPhee at 9:45 AM