A few blog readers have emailed and told me they've been enjoying my figures since the days of my old website, MacPhee's Military Modeling (obviously I enjoy alliteration). The old site dealt exclusively with 1/72 scale plastic miniatures, mostly because that's about all I painted until 2003. Then I discovered Battlefront's 15mm World War II line, and I've been painting metal figures ever since.

Still, the plastic figures have a certain charm, and sometimes I dust off an old box, open up my bag of tricks (you have to have a bag of tricks to keep the paint on the plastic), break out my Rustoleum plastic primer, and paint up a batch.

I painted these Carthaginians a couple years ago. The plastic world was all excited at the time about Minwax Polyshades, used as a dip. I gave these figures a simple block paint job, dipped them, then carefully painted the shields.

Libyan Spearmen
There are sixteen figures in total, all from two HaT packs: 8020 "Carthaginian African Infantry" and 8056 "Carthaginian Command and Cavalry." I based them up for Field of Glory today. 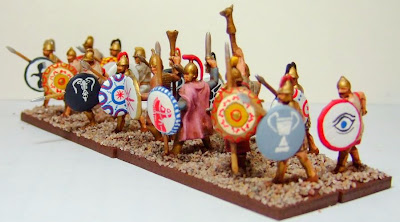 Shields
Here you can see the detailed work I did on the shields. I had already discovered Little Big Men Studios, obviously. They now make transfers for HaT figures, but at $.60 a transfer, the shields cost several times what the men cost. 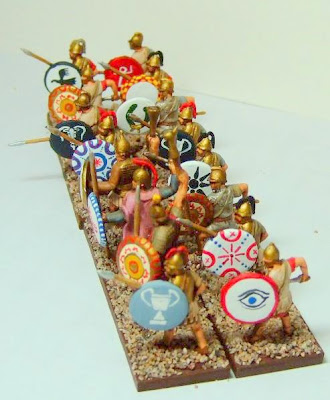 Shields
You can accomplish a lot on these smaller figures as long as you have a steady hand. The shields aren't anything fancy. I didn't do any shading of the background color, for example. But a few brush strokes can make them look really good. 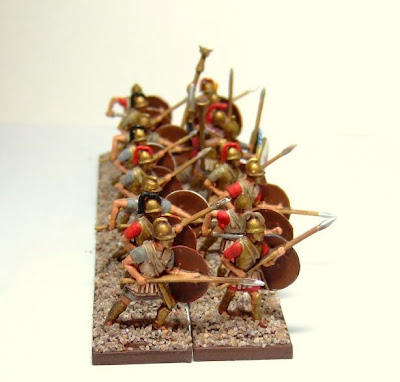 The Dip
Here you can see the shading from the dip, which is very obvious on the linothorax armor and the helmets. The dip didn't do much, however, for the skin and tunics. They still look pretty flat. Plastics usually have less crisp relief than metal figures, which is one reason I switched to metals. 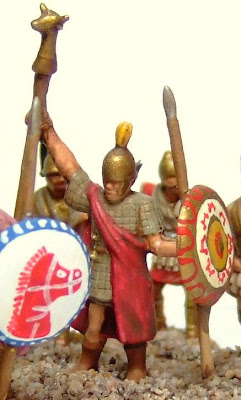 Standard Bearer
One fellow that shows the dip really well is the standard bearer. His quilted garment had just enough relief to allow the dip to take.

It was a nice diversion, returning to my roots as a gamer, and it's very tempting to start a FoG army with plastics.
Posted by Scott MacPhee at 4:38 PM