I have another commission that I'm starting now, but in the week between commissions I managed to do some painting for myself, continuing my work on the 1809 Austrian army.  These are two brigades of German grenadiers, all from AB.  I need one brigade of six stands and one of five for Wagram, but I need two brigades of eight bases each for Aspern-Essling, so that's what I painted.

As always, the AB figures were a joy to paint.  I painted the top of the bearskins in facing colors, which is correct for the early period.  By 1809 all grenadiers would have worn the Austrian colors instead of facing colors, but I want to use these figures for 1798.  And besides, the facing colors look more interesting. 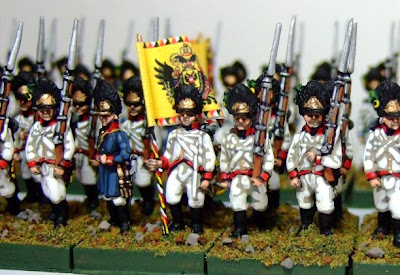 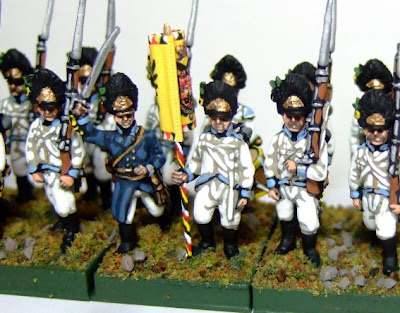 Grenadiers, Reuss-Greitz's Regiment 55
I always choose one Austrian regiment per brigade, then use that regiment's facings and button colors for the whole brigade.  That lets me use these same figures as battalion in tactical General de Brigade games.
So that's another 64 Austrian infantry down.  Just 248 left to paint!
Posted by Scott MacPhee at 7:05 PM