We had a smaller game than usual this month.  By request of some of the club members, we played a Napoleonics battle on my new terrain.  I fielded all the figures.  The Terrain Guy made the game mat, the roads, the rivers, and the hills.  We played in my little wargaming room, which only has room for four.  Once student canceled at the last moment, so there were just three of us present. 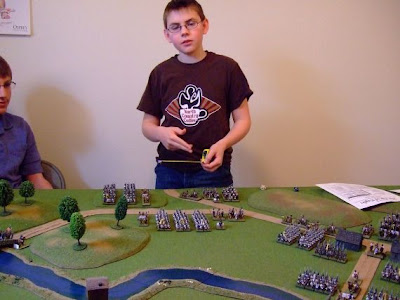 Austrian Commander Matt
Matt had played "Age of Eagles" at Tactical Solutions last October, taking Aspern with his Austrian corps, and he was eager to command the Austrians again.  The Austrians held high ground overlooking a river with three crossings.  The French had a column approaching each crossing. 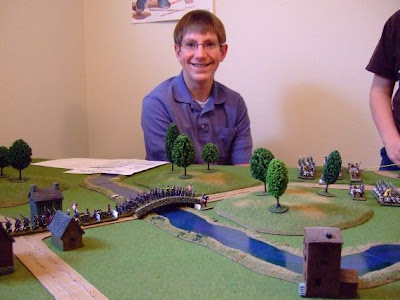 Nathan, French Left Column Commander
Nathan had not played the rules before, so we gave him a smaller command, one infantry and one cavalry division on the French left.  The French had an advantage in cavalry and artillery, but the Austrians had a heavy preponderence in infantry. 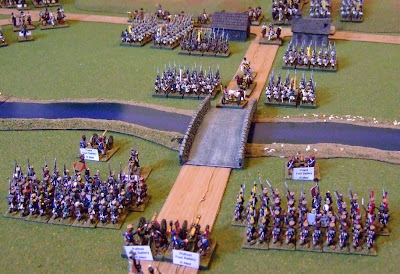 The Center Bridge
Two French infantry divisions and one cavalry division prepared to cross at the center bridge.  The Austrians held an advanced position, denying the French an easy crossing.  The battle developed into three seperate fights.  Here in the center, the French shattered two Austrian brigades, but the Austrians counterattacked and threw the French back across the river. 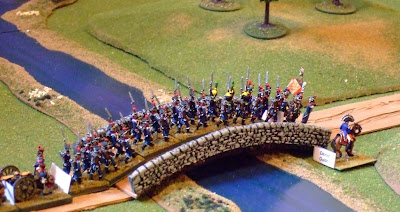 Left Bridge
Nathan threw his men right into combat.  The left road led across the bridge and ran through a valley between two wooded hills.  This was the largest French column, and if it could get established on the other side of the river, the Austrian position would be untenable.

Austrians Prepare on the French Left 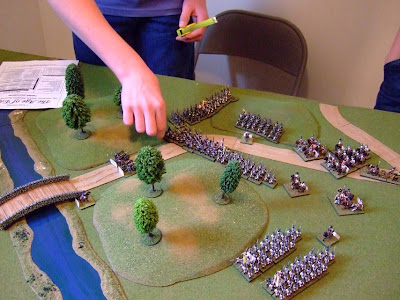 Austrian Counterattack
Matt moved just over half his army to meet Nathan's threat.  After initial French victories, the Austrian grenadier battalions, together with their curassiers, destroyed two French infantry brigades and pushed the French back across the river. 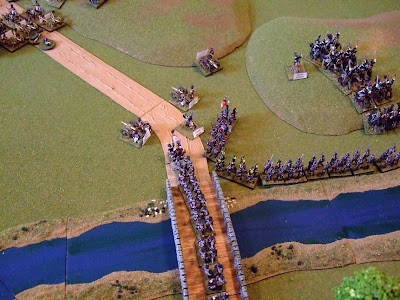 The French Right
On the right, I took an infantry and a cavalry division against the Austrians on the high ground.  It was the same story.  I had some initial success, taking two Austrian batteries and wrecking an Austrian brigade.  But a counterattack by Hungarian grenadiers checked my momentum, and a last-ditch French attack failed to break the Austrian line. 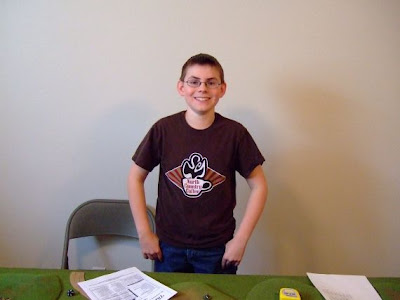 Matt the Victorious
With all three French columns making for the safety of the river, the Austrians had prevailed.  Matt basked in the glow of victory!  We left the gaming table for the foosball table, where I was more successful.
Posted by Scott MacPhee at 9:56 PM