I'm a big fan of Mark Sims's work, and the past year has probably seen me painting more Crusader figures than Old Glory.  The Rank and File line is, I think, and inspired idea, letting Mark concentrate on simple sculpts of the most common troops.  He started with ancients, went on to Seven Years' War, and added Napoleonic French and ACW late last year.
I picked up a pack of Napoleonic French command and spent an hour last night painting up the lone fusilier in the pack.

Mark always seems to sculpt exactly what I want in a wargaming figure.  The pose is perfect for building convincing units.  The figure is visually interesting without being overly busy.  The smaller detail, like lapel buttons and cuff trim, is exaggerated enough for me to paint, but not so much it becomes cartoonish. 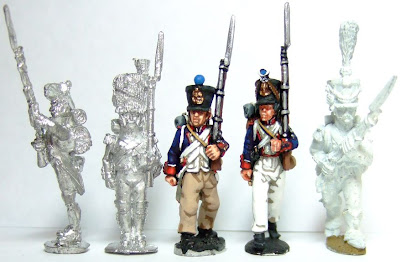 L-R Old Glory, Foundry, Crusader, Perry, Front Rank
Here are my two trial fusiliers, one from Crusader and one from Perry, side by side with some other manufacturers.  The Crusader figure is not quite the shortest, edging the Foundry sculpt by a millimeter.  And surprisingly, the Perry figure is not the tallest!  I would feel perfectly comfortable mixing any of the four figures on the left.  Foundry and Crusader are a little chunkier, Perry and Old Glory are a little leaner, but all four are within the same ballpark.  The Front Rank figure doesn't fit well with any of the others.  He's not really tall.  Indeed, he might be the shortest of the figures.  But he's massive.
When I start my Napoleonic French up again, I'll have to decide on one of these manufacturers for the bulk of my infantry.  Foundry is out because of price, and Front Rank is out because of proportion.  My existing French are all Old Glory, and I would like to work with something else for a while.  So really the choice is between Perry and Crusader.
I'm finding that a difficult choice.  I expected to love the Perry figures and find the Crusader acceptable.  Now that I've painted them, it's reversed.  That Crusader figure has "it," whatever "it" is.
Posted by Scott MacPhee at 7:00 AM