Wargames Factory Celt Warband: Out of the Box

Tony from Wargames Factory sent me their third release, "Celtic Warband," for review.  I won't be able to give this box the same attention I gave their Marian legionaries (I have three painting commissions that will keep me busy for the next few weeks), but here are my initial impressions upon opening the box. 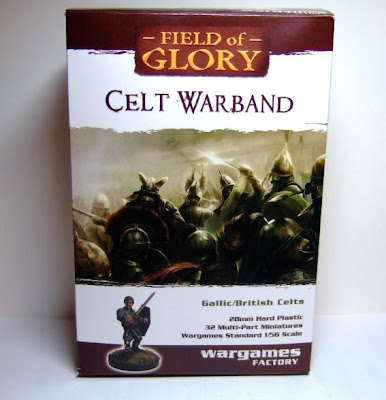 Unopened Box
The box itself is crammed full of sprues.  There isn't any wiggle room at all!  It's a cleanly designed box that should look good on store shelves. 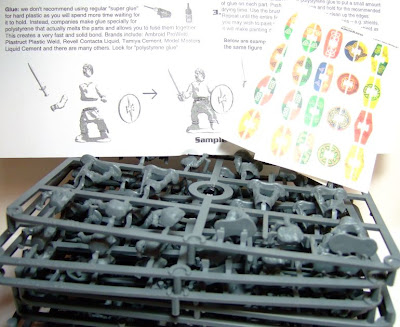 Box Contents
The box contains three different sprues, with multiples of each, a sheet of instructions, and two identical sheets of shield transfers, each with 16 designs. 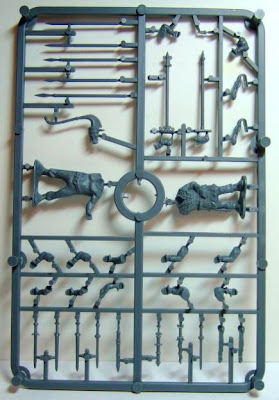 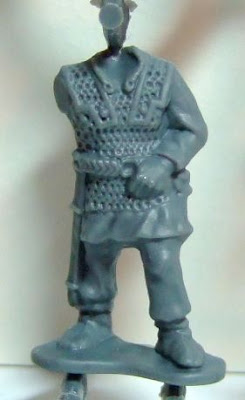 Sprue 1 Detail
The first sprue consists of command figures, standards, arms, and weapons.  I know a lot of people felt that the Romans lacked strong relief detail.  I didn't have any problem with them, one I was painting them, except maybe on the sandals.  This detail shot should reassure those people.  The chain mail has strong relief, better than many metal figures I've painted. 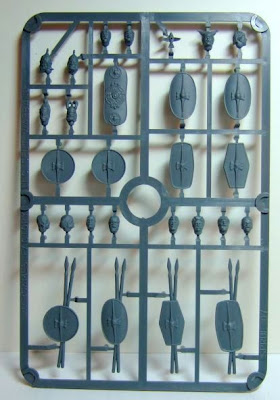 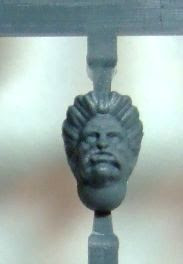 Sprue 2 Detail
The second sprue has all the heads and shields for the Celts.  The heads come in an impressive variety, with different helmet and hair styles.  Detail on all the faces is very nice.  I think I'll attempt a wash on these, because my usual painting style won't do justice to these faces.
The javelins attached to shields seem much too long, and I'll be cutting the bases down a bit when I assemble the figures. 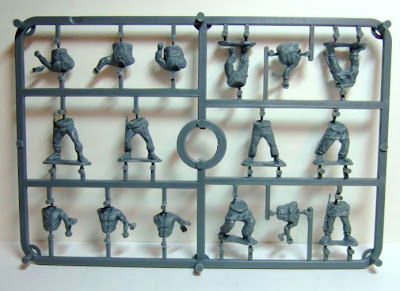 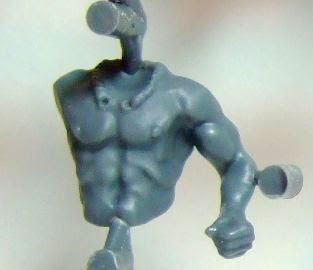 Sprue 3 Detail
The third sprue provides the torso legs for the rank and file Celtic warriors.  You'll have to pay close attention in assembly, because those figures who are wearing tunics have to be matched with the legs with the tunic extending past the belt.  The bare chested Celts have to have legs without a tunic extension.  I'm very glad to report that Wargames Factory have done away with the sprue length extending between the figures' legs.
I'm very happy with the sculpting on the bare torsos.  They remind me of the Greek sculptures (and Roman copies) of dying Gauls.  Again, those who were disappointed by a perceived lack of detail on the last set should be satisfied by these figures.

One Figure, in Pieces
Here's what you need to build one figure: six pieces, each with at least two contact points with the sprue.  Cleanup and assembly will be a little more time consuming than with metal figures.  On the plus side, no two figures should look alike.  You'll be able to vary the arms, head, and weapons at will. 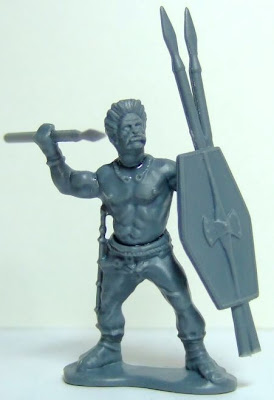 Assembled Figure
Here's the result.  I built a naked javelinman for my first figure, and I'm looking forward to painting him.  I might drill out the head sockets on the rest of my figures.  This fellow seems to have too long a neck.  And I'll be more careful in attaching the weapon arm.
Overall, I think this a very nice set.  You get 32 figures for $20, which is comparable to Old Glory's prices with the army discount.  Sometime in the next couple of months, I'll have some painted examples on the blog.

Posted by Scott MacPhee at 7:05 PM