I finished painting my 28mm Macedonian army last night, and I finished the basing about half an hour ago. While the tacky glue dries, I took some pictures of the 30 skirmishers I'll field in my Warhammer Ancient Battles army.
All the figures are from Foundry. I actually didn't buy any of these figures direct, but snatched them up on eBay whenever I could find a good deal. While I was painting commissions, one of my patrons sent me a box of Foundry javelinmen as a tip. Between hunting for bargains and freebies from a satisfied customer, I was able to get all my skirmishers for a good price.
My Macedonian line troops are all in uniform, with red tunics, white plumes, and cloaks whose color scheme differs by unit. I wanted the skirmishers to look a little more motley and a lot more colorful, so you'll see quite a few different tunic shades and almost no similarity between shields. I used 1" steel washers as bases, which means the figures will stick to magnetic sheeting for easy transport.
First up are the archers.

The eight bareheaded figures are from WG 3/8 "Greek/Macedonian Archers" The two figures in hats I bought on eBay. The seller claimed they were Foundry, and they may be, but they're sculpted in a noticeably different style from the other figures. I bought a bunch of hoplites from the same seller, and they were so ugly that I quickly sold them again. Still, I needed two archers to fill out this unit, so I went ahead and included these two stinkers.
So there are my 10 archers. The other 20 skirmishers are all javelinmen, the standard skirmish arm of ancient armies. 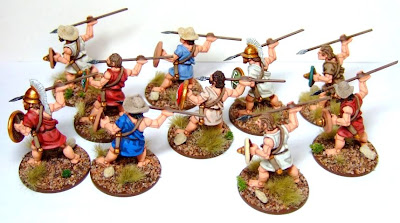 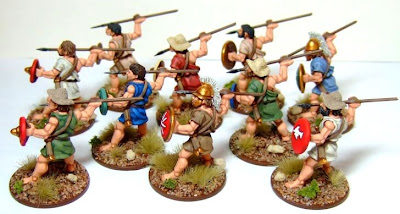 The javelinmen come from two packs: WG 3/7 "Greek/Macedonian Javelinmen" and WG 1/6 "Greek/Macedonian Peltasts Attacking." I hand painted all the shield designs.
I still have a lot of work to do in preparation for Saturday's show, but much of the time I'll be waiting for paint to dry. I'll try to get some more photos of my Macedonian army on the blog over the next couple of days.
Posted by Scott MacPhee at 9:07 PM