While I wait for the Perry order to come in, I finished painting the last of my Old Glory second edition AWI Americans. These figures are all in full dress, and I'm happy to report that the sculpts are solid efforts, with nice faces and good proportions.
Here first are the command figures from AWI-61 "Continental Command Full Dress." I painted the figures for two different regiments, one with blue jackets and red facings, based on an early New York Regiment, and one with brown jackets and red facings, which can be used for any number of pre-1778 regiments. 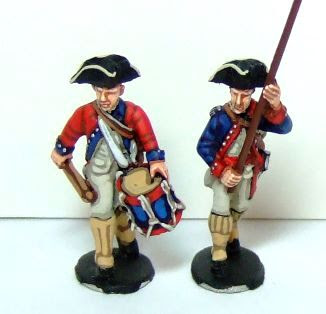 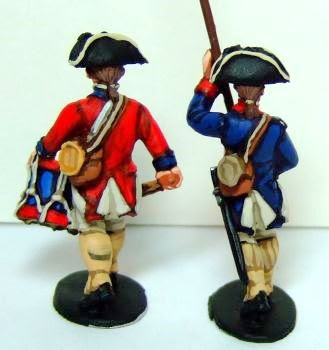 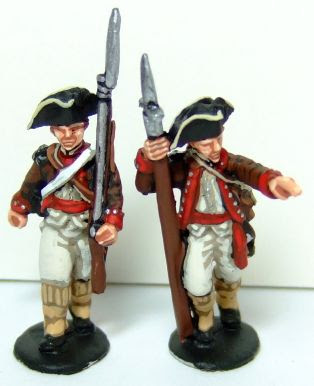 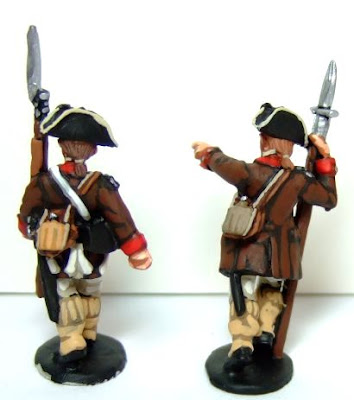 The command figures are nice enough, but I was even more pleased with the rank and file. The following figures are from AWI-57 "Continental Full Dress - Cocked Hats." 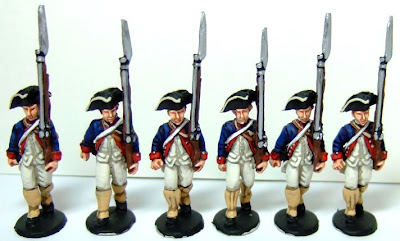 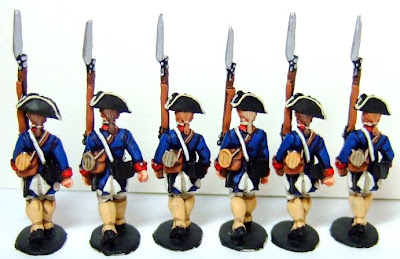 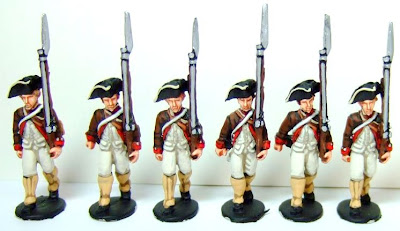 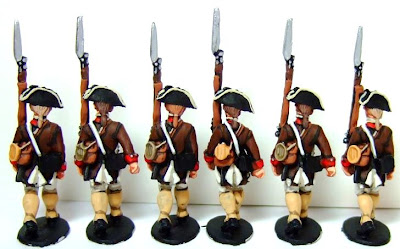 I thought the figures looked very natural, and as you can see, the faces are indeed much better than those in the hunting shirts packs.
As I wrote in the last post on the Old Glory Americans, I'll definitely use these figures in my games. Having dropped close to $400 on Perry figures, however, I'm not going to order any more Old Glory figures in the foreseeable future. These 36 figures will have to be grouped together in regiments without any additions. Here's how the Old Glory figures look with a mix of packs. 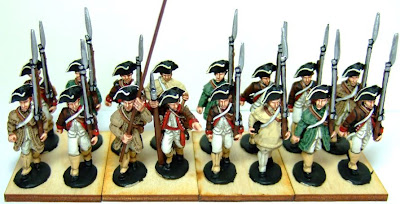 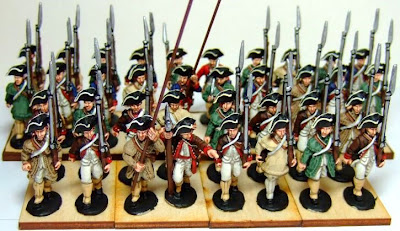 By mixing figures in hunting shirts and full dress, I'm able to depict something of the rag-tag look of the continentals. This may well be the way some units looked in 1777, when the early issue coats had mostly worn out and Washington was asking the states to send hunting shirts to equip his men.
The Old Glory line actually allows even more latitude than I've been able to show. They have packs of full dress and hunting shirts with floppy hats, which would allow one to vary his units yet more. But I still feel like that would give too uniform a look. In my mind's eye, Continentals looked as they do in this Troiani painting, but that would take figures in shirt sleeves, figures in civilian coats, and figures in uniform coats with trousers, none of which Old Glory has.
The final verdict? I would be happy enough with these Old Glory figures to field an army of them, but I'm treating myself to Perrys. Will the painted figures look good enough to justify the difference in cost? I'm going to find out.
In the meantime, if anyone knows of any images of painted Eureka Continentals, please point me in their direction!
Posted by Scott MacPhee at 7:59 PM