When I bought my packs of Americans from Old Glory, I had them through in a single pack of British so I could see how I liked them.
The British are dressed according to the 1768 clothing warrant, which really only makes them suitable for operations around Boston from April to June of 1775. And it's actually doubtful that many British infantry wore full dress even then! Still, this is the classic "redcoat" look that filled all our school years imaginations, and I'm not pedant enough to bar full dress Brits from any battlefield. These figures probably bear as much likeness to the wet and muddy foot slogger as any Napoleonic full dress figure does, and I doubt many Napoleonic gamers would banish full dress figures to the parade ground.
I painted these figures in white facings and lace, meaning to use them as Marines at Bunker Hill. The red coats got a slight highlight of pink, which I hope helps them to pop. 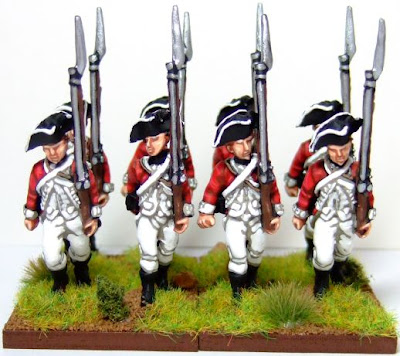 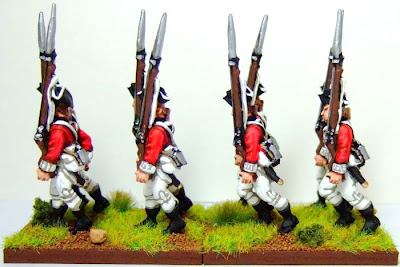 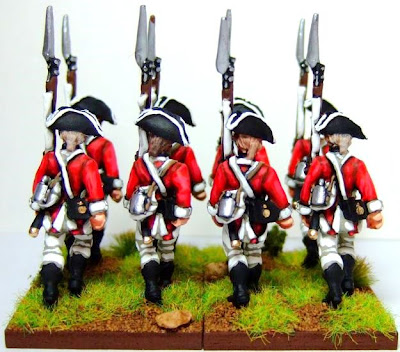 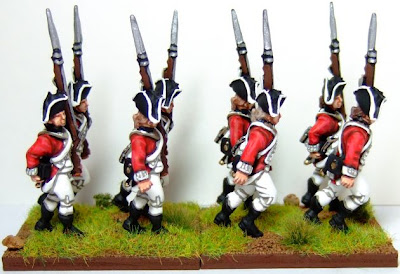 So what's the verdict? I like the figures well enough, and at $.60 apiece, they're a bargain. With Foundry and Front Rank as their only real competition, these figures will likely form the bulk of any British army I choose to build. Since Austin is focusing on figures in campaign dress, a few full dress regiments might allow us to fight the very earliest battles or field a bit more variety in later fights.
Posted by Scott MacPhee at 6:08 PM