Yesterday we played out the battle of Aspern-Essling, the 1809 battle in which Archduke Charles and his Austrian army inflicted a serious check on Napoleon's Danube campaign. Napoleon had bridged the Danube and pressed three corps onto the Deutsch-Wagram plain, but the Austrians managed to destroy the French pontoon bridge with a barge loaded with 55 tons of rocks. Without hope of reinforcing his small force, Napoleon took up a strong defensive position based on the villages of Aspern and Essling. Charles drew up his corps in a circle around the town and attacked.

We used the "Age of Eagles" rules for this fight. Because the convention's gaming slots were only four hours long, we had to bathtub the two day fight down to a manageable size. I cut most of the Austrian corps to half strength and accelerated their release schedule to compress both days' fighting in a single day. 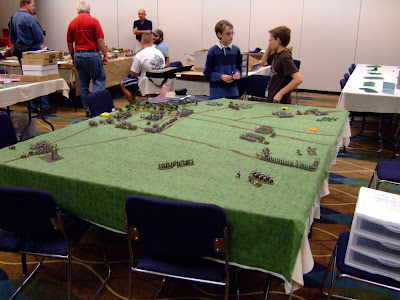 Starting Positions
The French were defending the left table edge, which was the banks of the Danube. The Austrians advanced in a large semi-circle. 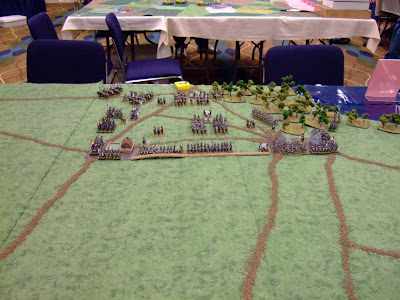 The French Lines
Essling is on the left, and Aspern is on the right. The French occupied a ditch between the towns. Because the Austrians had such a tough time coordinating their attacks at the actual battle, I limited the number of melees they could declare each turn. 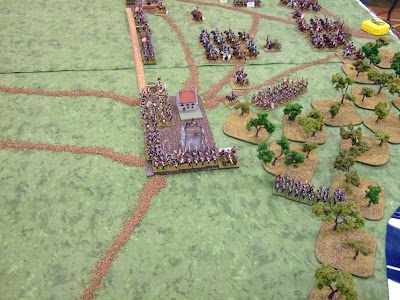 Another View of the French Defense
This is the village of Aspern on the French left. The French had four infantry divisions holding the main line and three cavalry divisions in reserve. 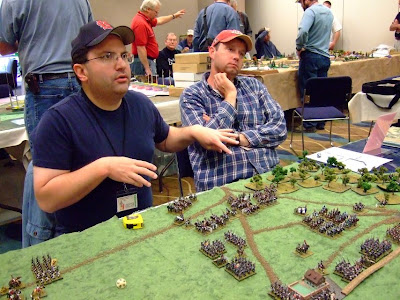 The French Generals
Austin and Scott commanded the French. They are old hands at these rules. 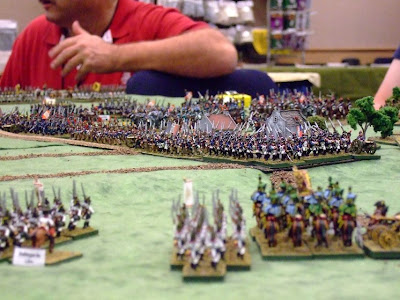 A Tough Nut to Crack
Although the Austrians severely outnumbered the French, Napoleon had chosen his ground well. This was a formidable defensive position, and the Austrians would have a tough time disloding the fortified French army.

In this picture you can just see Chuck, who was one of the playtesters for the "Age of Eagles" rules. Although he didn't play in the game, he did stop by occassionally to see how the battle progressed. 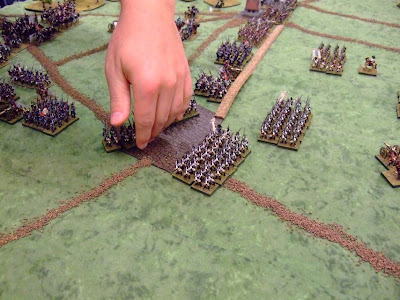 Austrians Take Essling
Don moved Lichtenstein's corps first, advancing straight at Essling. Even with their defensive bonuses, the French were unable to hold the town. The Austrians took Essling for the first time in our game. It would change hands five times. 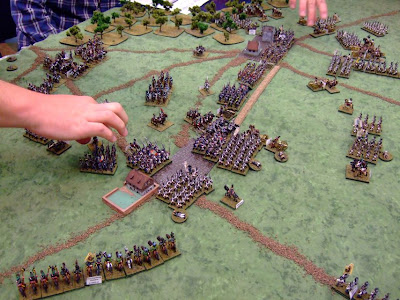 French Counterattack into Essling
Undeterred by his first serious check, Austin pushed his infantry back into the town and expelled the Austrians. All throughout the morning, Don and Austin pushed each other back and forth through Essling. 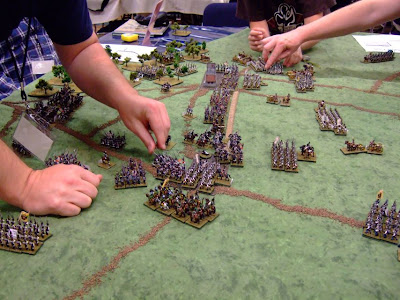 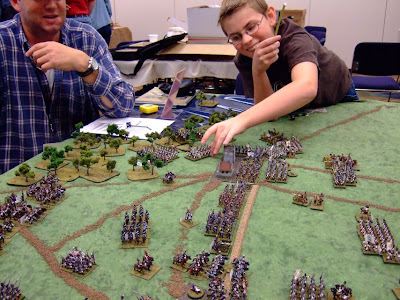 French Left Crumbles
The first major success for the Austrians came on the French left. Matt commanded Hiller's corps. He moved three infantry brigades, one cavalry brigade, and a battery of artillery against Aspern from the rear. The lone French brigade in the trees gave way before Matt's attack. 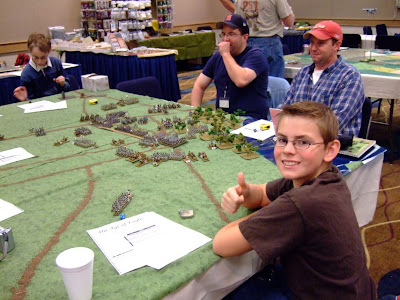 Matt Victorious
Matt was obviously pleased with his success. This was not only the first time Matt had played with these rules, but the first time he had ever played a Napoleonic game. 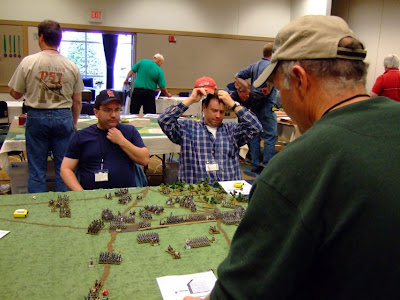 French Reaction
With Austrians all around them, the French watched their vulnerable left flank collapse. Scott moved some of the cavalry reserve to check Matt's advance. 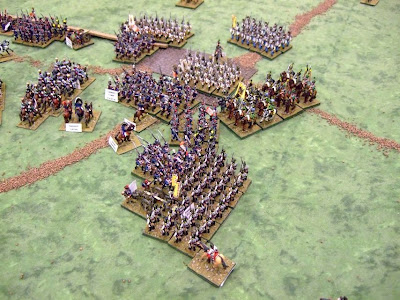 French Right under Pressure
With French reserves committed to the left, Don, Steve, and Caleb threw their corps at the French right. The Austrian reserve hussars joined Lichtenstein's and Rosenberg's corps in their attack. 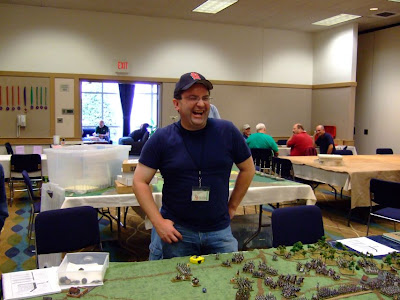 Bring It On!
As you can tell from Austin's cap, he's a fan of lost causes. The dire French situation didn't seem to faze him at all. Is today a good day to die? 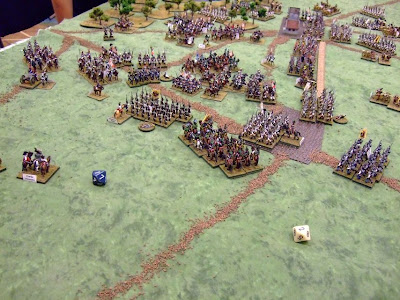 French Right Collapses
Apparently so. The Austrian attacks shattered the French infantry brigades on the right and took Essling for the last time. This was the situation when we ran out of time.

The French still had four brigades of heavy cavalry in reserve, and their infantry was not yet running for the Danube. They still possessed Aspern. It's possible that they could have stabilized their lines in another turn or two. Napoleon's engineers had completed a ramshackle bridge that might have allowed a few more French divisions to move across the Danube and reinforce Napoleon. 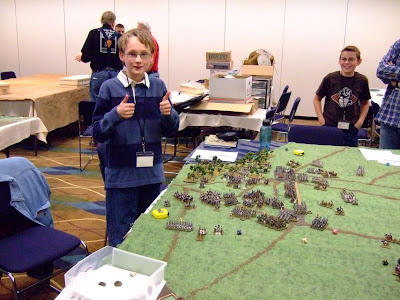 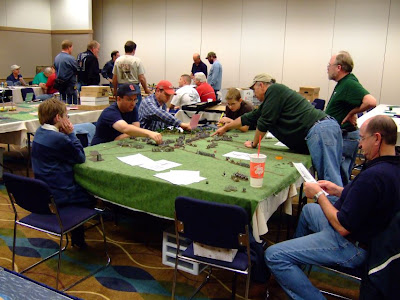