Last weekend Austin and Jon came to my place for a Field of Glory battle. I used my WAB armies on 60mm movement trays for the FOG basing. We fought a Second Punic War battle, with Hannibal's army facing off against mid-republican Romans. Here are the army lists: 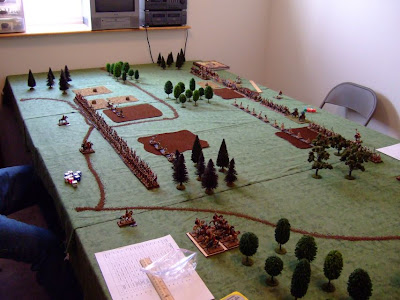 Initial Setup
The battlefield was a cultivated part of Italy. Scattered woods broke up the farmland. The Roman line is on the left with their one BG of cavalry on their right flank. That heavy infantry line looks very impressive, but the flanks look weak. At the very top of the table, on the Carthaginian right, you can see the two BGs of cavalry ready to pounce on the Romans. 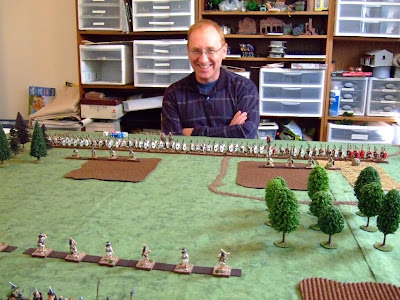 Imperator Jon
Jon commanded the Romans, and I took the Carthaginians. This was only the second time we had played FOG with our little group, so it was still very much a "learning the rules" game. 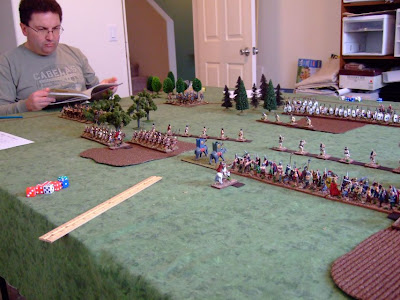 Austin the Lawgiver
Austin refereed the game for us, looking up rules when we got stuck (which happened frequently). You can see the Carthaginian center here, Libyan spearmen on the left, elephants in the center (1/72 plastics from HaT), and Gauls on the right. 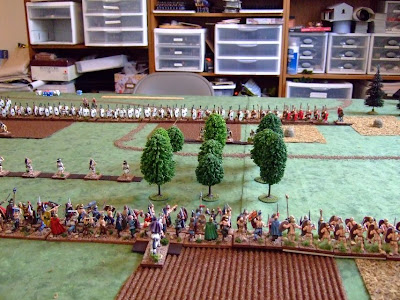 Gallic Advance
My savage Gauls, in various states of dress (or undress) made a striking contrast with the disciplined Romans. 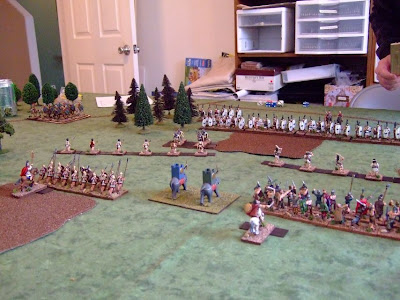 Clash of Skirmishers
I began the game by advancing behind a screen of skirmishers. I did manage to kill a base of velites, but the skirmishing had no other effect on the game. 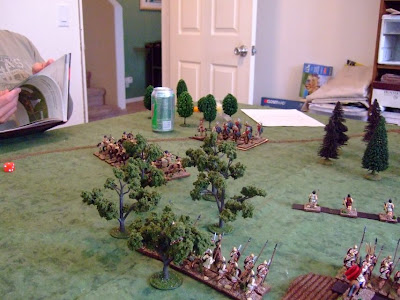 Cavalry on the Flank
As my Libyan spearmen got bogged down in the trees, my Numidian light horse moved forward to engage the Roman cavalry. I outnumbered Jon eight bases to four, so it should have been a cakewalk, right? 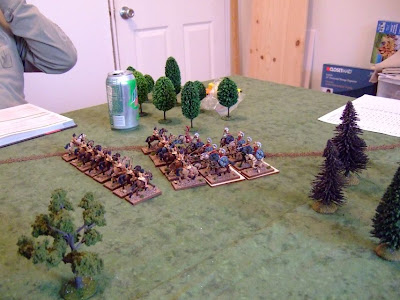 Wrong! The Romans attached a general to the cavalry and charged! I decided to stand and fight, which was a big mistake. The Romans reduced my lead unit to one base, which quickly routed. 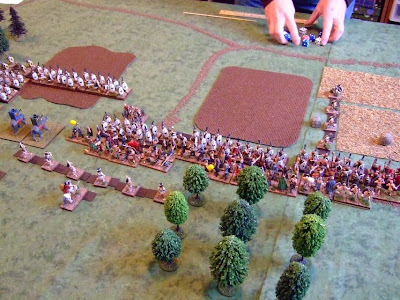 Heavy Foot Fight
Jon moved his legions to the attack. My Gauls were equally good in the initial impact phase, but as the combat ground on, the Romans' superior discipline and armor gave them a huge advantage. 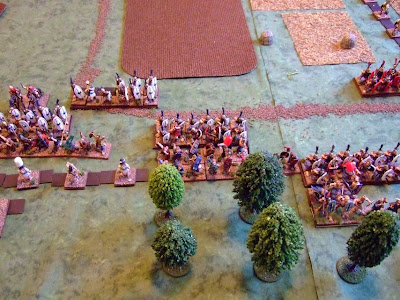 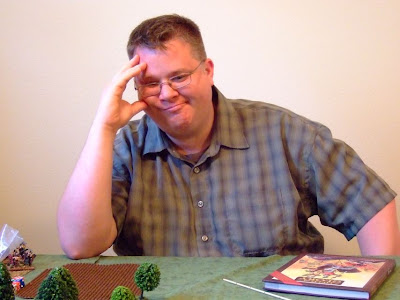 Vae Victus
I committed my elephants, but they didn't do much damage to the Roman hastati. My center was collapsing. My left flank was a shambles. My right flank cavalry was having a tough time getting into position. Six turns into the game, I admitted defeat.

We're still learning the FOG rules, and I made a number of mistakes that cost me the battle. Rather than bunching my Numidians up and closing to melee, I should have spread them out and worn down the Roman cavaly with harrasing tactics. Rather than advancing my center, I should have stayed put and given my cavalry enough time to get around the Roman left.

The genius of Hannibal probably would have won the battle. The mediocraty of MacPhee resulted in a defeat. Ah, well. Next time.
Posted by Scott MacPhee at 11:59 AM