Hannibal in Italy at Tactical Solutions

I ran this game in the evening session on Saturday. My Aspern-Essling game was a success; this FOG game was not. I had designed the game as a "get to know the rules" session, but that just didn't work out. A couple players were off chatting when they should have been listening. Almost everyone was quarrelsome. The hall was too noisy for everyone to hear me well. Most of these guys wanted to win rather than learn the rules. These all just made it a frustrating session for everyone.

In retrospect, Austin and I should have run a demonstration game. Or I should have been more forceful with the players. Live and learn. 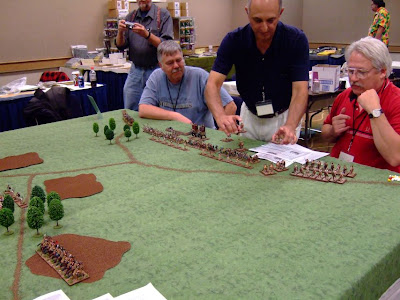 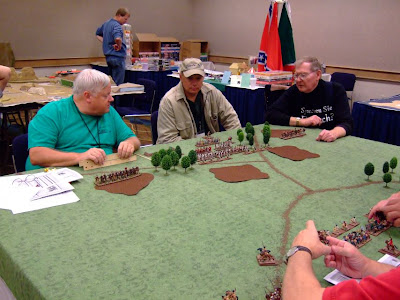 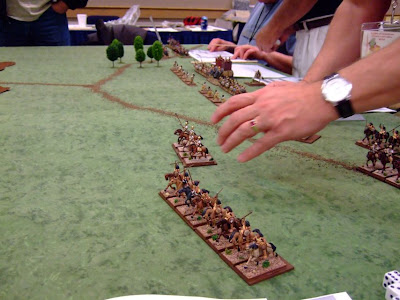 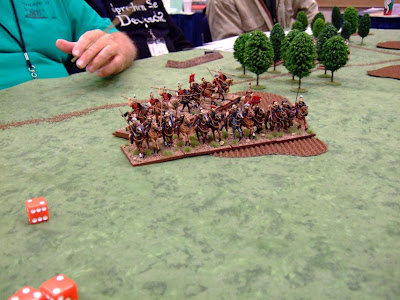 Terry moved out the Roman cavalry to meet them. 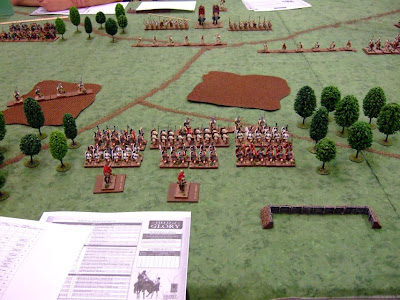 For two hours of our three hour game, all the action was on the flank with the cavalry. The Roman players elected to keep their infantry in a double line on their table edge. It made for a dull game. 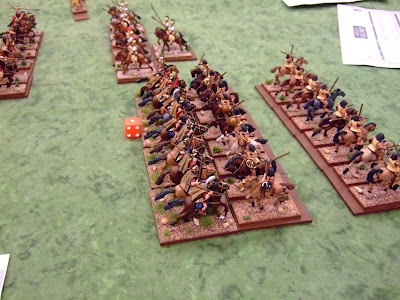 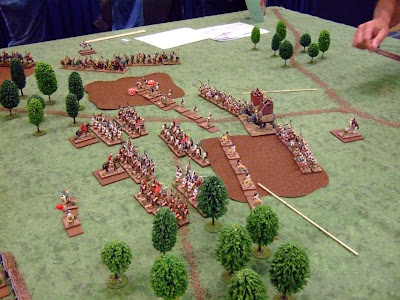 The centers finally met. Because their formation was so deep, it took the Romans time to really start hurting the Carthaginian infantry. 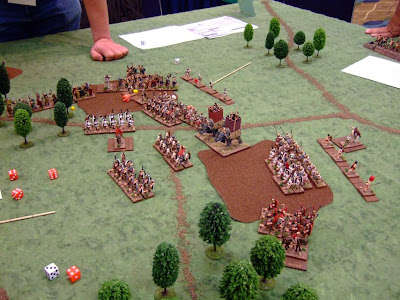 The Romans left their weakest unit, a group of Italian spearmen, in the center of their line to face the elephants. The Italians quickly broke, and the Roman center bent back. Here you can see the problem with keeping too large a reserve. This was the decisive point in the game. The Roman heavy infantry should be chopping the Carthaginians into tiny pieces. And only two of their five Roman heavy infantry units are engaged. 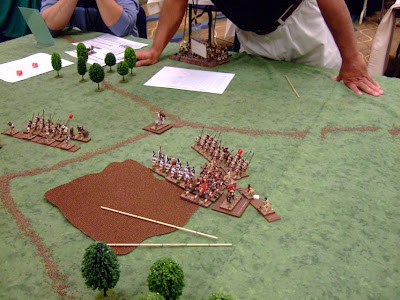 Where the Romans did get into action, they won. Here the Carthaginian infantry streams to the rear, leaving the elephants as the only formed Punic unit in the center. 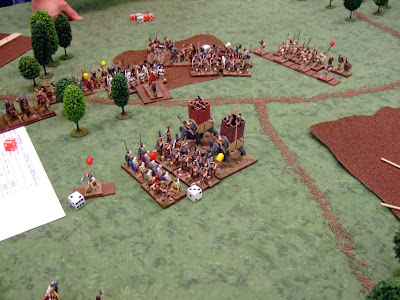 The elephants were all the Carthaginians would need. Here they strike and rout a unit of principes, winning the game for Carthage. 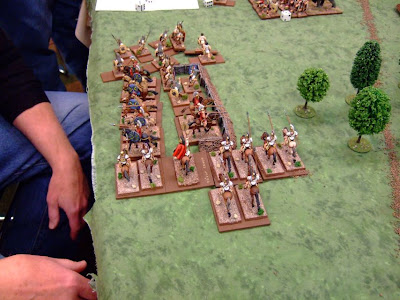 Even had the elephant not won, Spanish cavalry were preparing to loot the Roman camp.

So I now have four games of FoG under my belt, and my impressions of the game are starting to firm up.

I think the designers have the right idea about infantry combat. Units clash and gradually wear each other down until one side breaks. Often the winning side remains in perfect order with no casualties. That matches history better than the whirling, grinding fights we have with Warhammer Ancient Battles.

Skirmishers are severly understrength in FoG. They have such pitiful range that I've considered just doubling or tripling all the ranges in the book. It takes heroic dice rolling on the skirmishers' part and horrific dice rolling on the enemy's part for skirmishers to inflict any losses. They're very unlikely to disorder the enemy. And they get chewed up too easily by close order infantry. They should be much more able to evade. Between 250BC and 50BC, the Numidian cavalry was the best the Carthaginians and Romans had, but in these rules the Numidian cavalry just can't accomplish much.

The command rules are a little off. We tend to keep generals attached and fighting in the front rank, because otherwise they just don't do much.

The combat rules are clunky. Too many modifiers, too many exceptions. The language is confusing. What exactly is the difference between cohesion and order? What causes a unit to go disordered versus disrupted? I wish the designers had called "cohesion" "morale." I wish they would have come up with any name at all for a unit's level of formation order. It would have all made more sense in early readings.

I'm a quick learner, and with most rules sets, I can start moving away from the charts halfway through a game. Not with FoG. I like the effect of the rules, but the rules themselves make it much harder to get where we're going, with too many steps to go through and too many exceptions to remember. This is not an easy set of rules.

I'll probably stick with them a while longer, and they may grow on me. But for now, I'll still build my units primarily for WAB.
Posted by Scott MacPhee at 8:29 AM