I wanted some armored Roman cavalry for my Second Punic War battles, but Old Glory only offers unarmored equites. I turned to Crusaders Roman cavalry in mail to give me some hard-hitting heavy horse.

And here they are. I based these for Field of Glory instead of Warhammer Ancient Battles, and I have to admit, those multi-figure bases look good. My WAB cavalry are all on 1" frontage by 2" depth, and FoG calls for 60mm of frontage and 40mm depth. The frontage works pretty well. I mean, it's a tight fit, but the figures do fit. The depth doesn't work at all. I ended up going with a 60mm depth just to keep my figures from jostling each other in two ranks.

I was definitely impressed with the look of the figures, but when I went to assemble them, I found that the Crusader riders don't fit on the Crusader horses! All the horses have their heads up and their manes trailing in the wind. No matter how I tried, the manes kept the riders from sitting comfortably on the horses' backs. I finally got the figures on, but with some strange gaps between saddle and horse. The result is that the figures aren't too sturdy. I broke some off during painting, and I'm sure they'll break during gaming.

After prepping nine cavalry, I wised up and substituted some Old Glory horses. Bingo. I had a good fit, and those three horses (front right base in the photo above) fit well enough with the others to work as a unit.

One thing I screwed up; the Crusader riders are wearing boots, not sandals, but I painted them as sandals. Whoops. 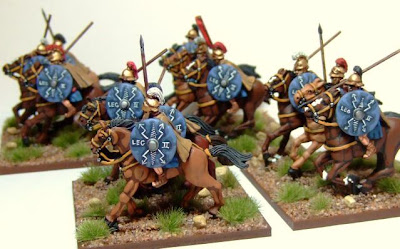 My favorite part about the Old Glory Roman cavalry were definitely the shields (see the last picture in this post). I don't know how accurate they are, but they really look neat. The Crusader shields were just a smooth disc with a boss, which is probably what the Romans really carried. If I've learned anything about painting ancients, it's that the shields must pop for the unit to look good. So I set to work painting a plausible design on these Romans.

For my Roman army, these armored cavalry will represent the actual Roman cavalry. My unarmored Old Glory figures will represent the Alae. I wanted these Crusader figures to work for the 1st century BC as well, so I went with a design that could work for either period. The shields got lightning bolts, a fake spine, and "Leg. II."

All the Crusader cavalry wear a cape, which I painted in the standard Roman army mustard brown. It's a dull shade on these otherwise flashy figures, but it's probably what they wore. 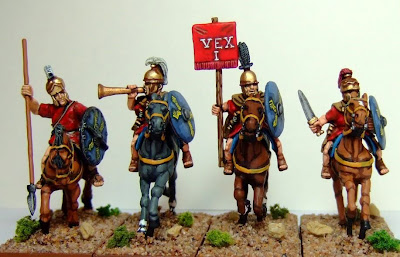 The Old Glory cavalry lacks command, and WAB gives bonuses to units with officers, standard bearers, and musicians. I picked up a pack of Crusader unarmored cavalry command and tried to match my earlier paint job. Here's a shot comparing the size of the Old Glory and Crusader figures. The Crusader figures look taller than they are because the riders just won't sit on their horses. You can clearly see the gap between horse and sadle on the rightmost figure here. 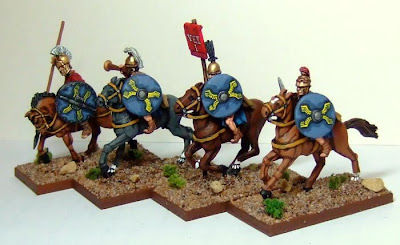 And here you can clearly see the difference between the Old Glory and Crusader shields. I definitely like the Old Glory shield better, but that's just a matter of taste.

Overall, I was a little disappointed with these figures. The riders and horses are beautiful seperately, but they didn't work well together. I emailed Mark Sims, who sculpts Crusader Miniatures. He confirmed that he had switched horses since starting the line, and he admitted that the new horses don't really allow for a good fit. He suggests trimming back the mane, which I did not try. I would probably be more upset about the whole thing if Mark hadn't been so nice about it.
Posted by Scott MacPhee at 9:19 PM