This is the last unit for my WAB Marian Roman army. These figures came in Thursday's mail. I painted and based them on Friday, sprayed them with gloss lacquer and then dullcote Saturday morning, and entered them in the modeling competition the same day.

I wanted some troops to represent the Gallic auxilia Caesar had with his army, and these figures fit the bill. They have Gallic helmets, shields, and swords, but they wear tunics with no trousers. I figure this would have been the appearance of Romanized Gauls of The Province.

All 16 Figures
I primed the figures black and drybrushed the helmets with Testors enamels. I used a mix of bronze, gold, and silver. The spears are from North Star.

The shields are hand painted. They just came out alright. I wasn't able to get clean designs on the shields, probably because I was painting these at 11:00PM the night before the show.

All 16 figures, rear view
The tunics are all unbleached linen, which I thought would be likely for auxilia. I used Delta Ceramcoats, working up from mudstone to lichen grey, to a 20/80 lichen grey/white mixture.

Here you can definitely see the mixture of Roman clothins and Gallic equipment. Those are definitely Gallic swords on their hips, but tha sandals and bare legs really make the figures look Roman: perfect for The Province, I think. 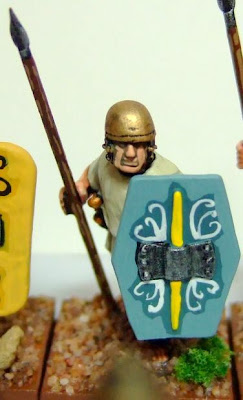 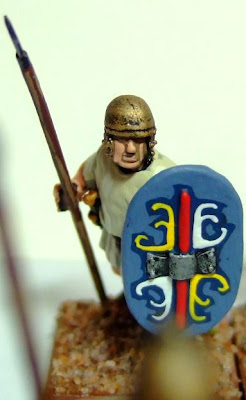 I'll be painting more Crusader figures while I get ready for my gaming convention in two weeks.
Posted by Scott MacPhee at 7:13 AM